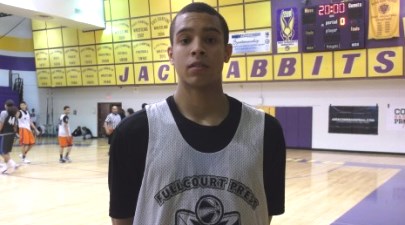 The number of available prospects in Arizon'a 2014 senior class is beginning to dwindle as we continue to see the spring evaluation period develop.  Two more top-rated prospects in Arizona's 2014 class are off the board after Mesquite High School’s talented 6-foot-4, 180-pound senior shooting guard prospect Zach Green and Vista Grande's developing 6-foot-9 senior post Quin Price both signed this week with a basketball program in the Big Sky Conference.

Green and price took an official recruiting visit last weekend together to Montana State University.  With the recent hiring of former University of oregon assistant coach Brian Fish as the new head coach at the school, Fish was in search of some immediate talent to help solidify his lineup for next season, and he hit the jackpot with Green and Price.

Both prospects signed national letters of intent with the Montana State program while on their visits.

Green went into the 2013 spring evaluation period as one of the lesser known top-rated prospects in Arizona’s rising senior class, but took full advantage of the opportunity to raise his recruiting stock during the club season.  While traveling and competing with his club program, The Magic (AZ) coached by Ray Arvisu, Green impressed numerous college coaches with his athleticism, high motor and ability to make plays.  Amidst strong competition and playing at a level much higher than he had during the high school season, Green carried his strong play over into the summer months.  As a result, Green began to garner serious recruiting attention.

Green would suffer a season-ending injury during the high school season this year - causing him to miss much of his entire senior season.  As a result, Green saw his college recruitment tail off significantly.

As a junior on a challenged team, Green averaged a team-high 17.2 points and 6 rebounds per/game.

Quin Price is among the state's best kept secrets in the 2014 class.  A very unheralded post prospect, this young man has proven that he should have been ranked much higher in the class, and also received much higher college recruitment.  Montana State is getting an absolute steal in Price.

While living in Casa Grande, Arizona, Price has soared well below the recruiting radar and has gone unnoticed by almost all scouts and media outside of the state.  His ability to play the game is improved by his natural size and athleticism which are glaring attributes for this talented prospect.  Price has a bright future ahead of him and has the potential to become an All-Conference performer at Montana State.

Congratulations to both of these two yougn men on their tremendous accomplishments as student-athletes.