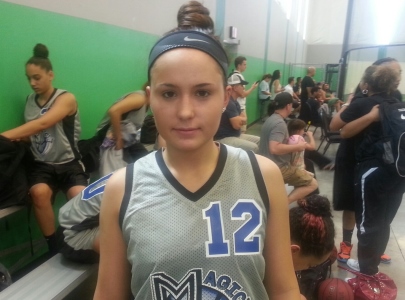 The wait is finally over for talented and gifted 5-foot-9 senior point guard prospect Noelle Kellers.  After sitting out her final season of high school this year, Kellers has found a college home and it is a big-time opportunity for her, as Kellers has decided to go the juco route - landing at #1 ranked Trinity Valley Junior College in Texas.

Trinity Valley is the nation's top women's basketball program, and is coming off winning their third consecutive national championship in a row this season.

Kellers advised me that she is very excited about the opportunity.

"Their program is amazing," said Kellers.  "They really wanted me and want me to come in to provide shooting and ball handling.  I am very excited to go there.  Basketball there is big time."

Kellers is super excited for the chance to simply play again next season as well, after sitting out her final senior season this year due to AIA transfer rules.  After deciding to transfer schools from Desert Mountain HS to Horizon HS, the AIA ruled her ineligible for her senior season, causing Kellers to have to sit and watch all season in unbelievable fashion as her friends and teammates competed without her.

In the interim, Kellers worked very hard in the weight room all year and advised me that she has added more than 20 pounds of muscle to her frame.  She has also fully recovered from a past ankle injury that caused her to miss much of the 2014 summer evaluation period.

Last season as a junior for Desert Mountain HS, Kellers led her team in numerous statistical categories – being selected as her school’s Most Valuable Player for the season.  While her team struggled to win ball games, Kellers averaged 11.8 points and 2.4 assists per/game.  As a sophomore, Kellers also soared for Desert Mountain HS – averaging a team-high 16.6 points, 3.2 rebounds and 2.3 assists per/game on the season.

Congratulations to Noelle on this amazing accomplishment from myself and our staff here at Arizona Preps.  She is a very nice kid with a great personality.  We wish her the best in her basketball future.