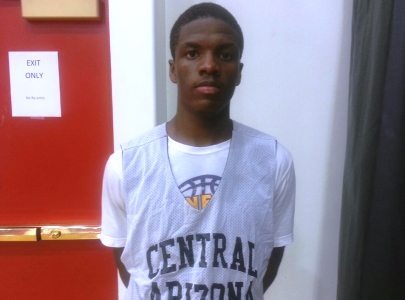 I spent the day at Glendale Junior College on Saturday, and I mean the entire day watching this year's annual ACCAC Junior College Jamboree.  My favorite event of the year, as I get a chance to watch each of the teams in the conference before the season begins - in a pre-season format.  While there are never any guarantees that the players I watch on the day will necessarily be all of the top prospects to watch for during the season, this event is always very exciting and gives a very good glimpse into who to watch for the up-and-coming junior college season.

Here are the top overall individual freshman performers/prospects that I witnessed on the day - the day's very best prospects to watch this season . . .

- Chaisson was a major bright spot on the day.  Scored in a variety of ways on the day - either from inside or outside.  An athletic and strong prospect with excellent size on his frame.  Very good scorer around the basket and also a good shooter with range on his shot.  Has a good mid-range game and a nice touch.  Capable of being effective anywhere on the floor.  Active rebounder and shot-blocker for his size.  Very good finisher.  Top freshman prospect on the day.

- Johnson is a very long, rangy post player with a thin physical frame.  Runs the floor quite well and is a good finisher in transition.  Has good athleticism and is also a good finisher around the basket.  Has solid low-post moves and a good jump hook.  Active rebounder.  Very good shot-blocker and also changes a lot of shots.  Good low-post defender.  As he adds size to his thin frame and gets a body he will maximize his potential as a player.  Good looking post prospect.

- Rosser, a native of California, was another bright spot on the day.  The talented forward prospect has good size and a nice overall skill level.  He has good lift off the ground and is a good finisher around the basket.  Also has a good perimeter shooting stroke with range when he is left open, but he mostly gets things done inside the paint and from mid-range.  Active rebounder and shot-blocker.  Runs the floor hard and is a very good finisher in transition.  Has excellent potential for the future and should develop into a nice prospect over the next two years.

- Hard to believe Robert Selmon is still only a freshman, but after two full seasons of not playing after a storied high school career, Selmon enters his first junior college season.  This season should be a nice breakout season for Selmon if he ever plays.  Did not play in Saturday's JUCO Jamboree either, after he was still not academically cleared to play.  Selmon is a very talented wing prospect with a very nice shooting stroke and good versatility on the offensive end.  Good rebounder.  OK defender.  Could be a big breakout season for Selmon this season if he plays up to his potential.  High school qualifier.

- Singleton is a strong, well-built and athletic post player that is able to guard either the center position or the power forward position on the floor - a valuable asset to any team.  Played the majority of both games for intense head coach Jerry Carrillo on the day, and helped lead his team to two victories.  A strong rebounder and finisher around the basket, although he does not possess much skills away from the basket.  Runs the floor hard and locks up defensively.

- O'Boyle impressed on the day with his ability to shoot the basketball with excellent range, while also displaying sneaky athleticism and a nice overall feel for the game.  A graduate of Sunrise Mountain HS in Peoria, AZ last spring, O'Boyle seemed to come out of almost nowhere in this year's event and emerged as a serious college prospect by the end of the Jamboree on Saturday.  Has good overall size and a nice feel for the game with a sweet shooting stroke with nice range.  He goes straight up and down on his shot and also moves well without the basketball.  He also is a good finisher in traffic and attacks the basket when given the opportunity.  He is also deceivingly athletic and had one surprising finish on the day over a defender.  Good freshman prospect.

- Nunn is a developing post player that has some potential for the future but is still raw offensively.  An active post talent, Nunn competes and plays with good energy on the floor.  OK post moves.  Good hands.  Runs the floor.  Good rebounder.  Solid shot-blocker.  Needs to continue to learn the game to maximize his ability.  A native of Arkansas.  High school qualifier.

- Twyman is a well-put-together point guard prospect physically with a nice handle of the basketball.  Capable of getting where he wants to on the floor.  Sees the floor well and is a good passer.  Good penetrator and finisher.  Good three-point shooter, has range and a quick release.  Pushes the basketball.  Nice looking guard prospect with very good potential for the future.

- Medder now plays after sitting out last year after graduating high school.  An ultra-athletic 2, 3 prospect that plays well above the rim and is an excellent finisher.  Capable of finishing at the rim in the open floor or in the half-court set.  Very good defender and an active rebounder.  OK shooter.  Best from mid-range and still needs to become more consistent from three-point distance.  Capable of playing both guard positions on the floor.  A high school academic qualifier.

- A transfer from Grand Canyon University where he was showing excellent promise as a college prospect, Brooks now picks up his career in the junior college ranks where he will need to re-invent himself as a junior college prospect.  Had a solid showing on the day but I expected much more from him.  Played really cool on Saturday.  He will need to play much harder to reach his full potential on the basketball court.  An athletic and long, rangy wing prospect with very good versatility.  Good overall defender.  Active rebounder for his size.  Good ball handler and passer.  Has very good potential and is a sleeper.

- Lovings is a big-body low post player that gets good inside post position and likes to score around the basket with a nice left-handed touch.  Very strong physically.  A very good finisher around the basket.  Does not venture too far away from the basket.  Active rebounder.  Solid shot-blocker.  Runs the floor.  Good low-post defender.

- Gershan is a versatile forward prospect that is big and strong enough to play the center position as well.  A left hander that is capable of stepping outside and shooting the basketball, although he needs to be more consistent in his shooting stroke.  A good rebounder.  Solid low post defender.  Has good potential after two years of juco.  Excellent division-II prospect.

- After taking a year off, Burnett is back and looked really good on Saturday.  A very athletic and strong combo-forward prospect that plays much bigger than his size suggests.  Excellent finisher inside the paint with excellent lift off the ground.  Showed a very good ability to shoot the basketball from mid-range and also to the three-point arc.  Active rebounder and shot-blocker.  Good defender.

- Point guard prospect that shared time in the backcourt with Twyman, and will look to share time in the backcourt all season long.  A heady point guard prospect that gets others involved.  Very good penetrator and finisher, with either hand.  Good body control.  Has good quickness off the dribble.  Very good defender with quick hands.  Solid shooter.  Pushes the basketball, very good in transition.

- After some personal issues, Brown is back after a strong high school career at Cesar Chavez HS.  Floor general PG with excellent quickness and a strong handle of the basketball.  Sees the floor and pushes the basketball at all times.  Excellent on-the-ball defender.  Good finisher in the lane.  Good shooter with some range.  A potential success story if he can continue to work hard.  Among the better point guards in the conference.

- An excellent shooter with good size on his frame.  Has a nice release on his shot.  Plays with very good intensity.  Solid ball handler and passer.  Good defender.  Active rebounder.  Fundamentally sound prospect.

- Lash is a gifted scorer that is capable of scoring in bunches - either from mid-range or from deep.  A very good shooter with nice range and a quick release on his shot.  Very good scorer in transition.  Always around the basketball.  Good ball handler and passer.  Capable of playing both guard positions on the floor.  Good defender with quick hands.  Active rebounder.  Sleeper.

- A high scoring guard prospect in the high school ranks.  Now having to change his game to run a basketball team, so there will be an adjustment process.  A very good shooter with range.  Small size makes it difficult to get his shot off, so he will need to look for ways to score at the junior college level.  Good passer and ball handler.  Solid defender.

- Mueller is a good-sized wing prospect with a good overall skill level.  A very good shooter with range and a quick release on his shot.  Also a deceiving athlete and a good finisher in transition.  A solid ball handler and passer.  Good rebounder.  Solid defender.

- Kuoc has an excellent motor and a live body.  Of African-born descent, Kuoc is an active rebounder and shot-blocker.  He is also an aggressive finisher around the basket and attacks the rim with vigor.  Still developing his low post moves and is an overall raw offensive talent, but he has some good potential for the future as an aggressive 4-man.

- Little is a good, solid young point guard prospect with good range on his shot and a nice shooting stroke with range.  He will share backcourt duties this season with Nogales' Andres Marquez, but he is a quality young guard that has good potential.  Good ball handler and passer with solid vision, but is still working to learn how to run a team.  Still, will be a nice guard prospect after two years.  A high school qualifier.

- Andres Marquez will be in a learning role this season but he is a talented and quick point guard prospect that will have excellent potential for the future, simply because he knows how to run a team.  Makes other players around him better.  Capable of scoring for himself as well.  Very good ball handler and passer.  High school qualifier.