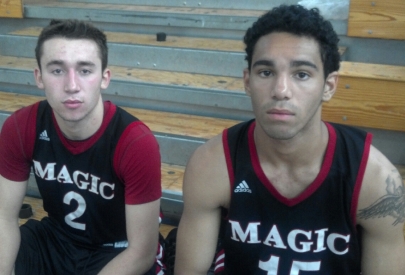 It was a busy night on the campus of Brophy Prep, as fans poured into the school's parking lot for a concert on the school's campus.  With so much activity around the school's campus, there were also many Broncos fans in the basketball gymnasium looking to support their home team in an exciting match-up with Westview High School (3-3).

The match-up between Brophy Prep (4-2) and Westview would be a reunion of sorts for 6 different players between the two teams who competed together this past spring and summer for the same club program - the Arizona Magic.  For Westview's 6-foot-9 senior post Andre Adams, 6-foot-4 senior forward Isaiah Bellamy and 6-foot-1 sophomore guard Kendall Barnes, and also Brophy Prep's 6-foot-2 senior guard Romano Bottini, 6-foot-3 senior forward Connor Triplett and 6-foot-2 sophomore guard Brock Brunkhorst, this would be an opportunity to gain bragging rights for one of the two groups of young men.

For Westview, it was also an opportunity to win their third consecutive contest after a rough start to the season.  Westview began the high school season as losers of their first 3 games in this year's Hoop Hall West pre-season tournament - three convincing losses against tougher competition.  Westview had won their last two games in convincing fashion as well.

The two teams would play an ugly first half, filled with numerous turnovers in a low-scoring affair.  Westview would take a 22-18 halftime lead.

Brophy head coach Tony Fuller would struggle to find any continuity in the third period with his team - making constant substitutions as he looked to find the winning combination.

Westview would take a big lead, 39-27, after the third period.  As a result, Westview would go one to win the contest - holding on for a 54-44 victory.

Westview first-year head coach Brendan McEvoy would get good production from his bench in the road win - a game that would be controlled in the middle by Andre Adams.  Adams would finish the game with 9 points, 12 rebounds and 12 blocks.

Recruiting Notes:  Westview's talented 6-foot-9 senior post Andre Adams is the state's best available prospect for division-I college programs, but he is still working hard in the classroom to qualify academically.  As a result, each game for Adams includes coaches from numerous top-rated junior college programs - looking to gain ground for Adams.  Adams is currently progressing very well this school year in the classroom, but he will need to continue to work very hard to become an academic qualifier.  Adams is a tremendous talent with an even better personality and attitude.