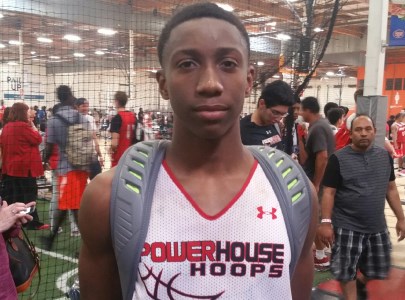 After an injury to his hand recently and seeing a couple players leave the team, the Powerhouse Hoops 17U Black team looked like they would need a major boost in production from their bench in last weekend's West Coast Elite Spring Classic in Las Vegas.  Rather than get it from another player on the team, Powerhouse would get an epic effort in the tournament from Corona Del Sol High School's superb 6-foot-1 junior guard Saben Lee.

Lee went into the spring evaluation period possessing an amazing 16 different scholarship offers already, and was regarded as one of the better prospects in the West.  After a dominating performance in Vegas, Lee became an elite-level prospect in the West, after he was considered as the best overall prospect in the Vegas event.  Lee's performance was almost epic, as he showcased his superior athleticism and ability to make plays for himself and others at will.  Lee was almost unguardable in the event and proved that he is a definite high-major recruit for many college programs to take a hard look at this summer.

Lee's play would lead a group of smaller college prospects all the way to the tournament's 17U Open Division championship game, where they would fall to a talented Earl Watson Elite (CA) team.

Chaparral HS 6-foot-1 junior guard Colton Kresl was very strong in his play over the weekend - shooting the basketball with a very nice shooting stroke and running the team from the point position, which gave Saben Lee an opportunity to focus on scoring with this group.  Kresl is a very skilled and crafty performer that I always enjoy watching play.

Congratulations to the Powerhouse program and coaches John Ortega and Jerome Joseph for an excellent performance during the event and for bringing excellent exposure to Arizona basketball.