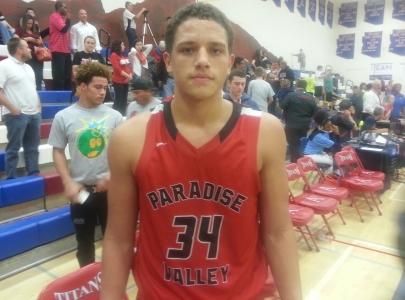 Arcadia High School's gifted and high-scoring 6-foot-6 senior wing Connor Nichols has had a terrific senior season for himself and his high school program - pouring in numerous scoring outbursts this season.  On Tuesday evening, in a rivalry match-up with Paradise Valley HS, the Trojans would overcome a big game-high 35 points by Nichols to win the contest on the road and improve their terrific record this season to 18-2.

Paradise Valley HS quality head coach Mark Macgowan is known for game preparation, and early in the game Paradise Valley would build a quick and large advantage - leading Arcadia, 26-16 with 4 minutes left in the first half, behind 7 points from 6-foot-3 senior forward Cedric Jacobsjones (pictured).  Jacobsjones is one of the premier post playuers in the state.  While undersized, his physical strength and athleticism, combined with a nice left handed touch make him a very productive player.

Arcadia would come back in the game though, just before the half.  After a put-back by Nichols after a missed free-throw by a teammate, Nichols would then collect two offensive rebounds on his own missed shots, and then convert a three-point play after being fouled in intense fashion.  Nichols' three-point play would pull Arcadia to within 2 points of PV - 26-24.

Shortly after the Nichol's performance, 6-foot-4 senior forward Avonte Nelms would throw down a one-handed dunk on the break, just before the half, but PV would hold on to a 31 to 26 lead over Arcadia heading into halftime.

PV would hold on to a 44-42 lead heading into the fourth period, and then Jacobsjones would take over down the stretch for his team - scoring a transition basket and then converting another nice post move around a defender with less than 2 minutes to play in the game.  Jones's two baskets would give the Trojans a 56-52 lead, before some calm free-throw shooting by the Trojans would seal the victory for Paradise Valley - 60-55.

Cedric Jacobsjones would finish with a team-high 17 points in the win, while 6-foot-4 junior forward CJ Vanbeekum would contribute 12 points.

To go along with Nichol's game-high 35 points for Arcadia, Nelms would also finish with 14 points.

Notes:  Paradise Valley is on an impressive run this season and has it rollin' - winners of their last 14 games in a row.  Their last loss came in the beginning of December, in 2014.  When you put it like that it sounds like a long time ago, and it has been.  This group could potentially run the table for the remainder of the season and not lose another game - heading into the state playoffs at season's end with a potential 20-game win streak.

In Arizona high school basketball, the importance of a tall post player can be diminished by the size and strength of a player like Cedric Jacobsjones, who is much more difficult to defend and keep off the glass.  Jacobsjones is a handful of a player and athlete and will give opposing team's post players major problems throughout the remainder of the season - a nice advantage for the Trojans.