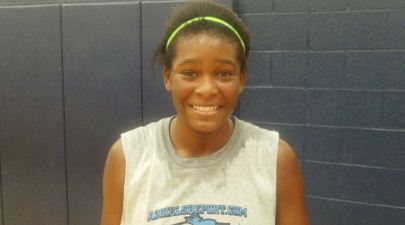 Arizona's 2014 class of girl's prospects is very talented, although not as loaded as the previous 2013 class in the state.  One of the top prospects in the class is Mesquite High School's 5-foot-8 senior guard/forward Cecily Wilson.

Wilson is entering her senior season this year, only after turning in a strong high school career thus far.  As a result of her performance last season and a strong performance this spring and summer, Wilson has given a verbal commitment to Long Beach State University and head coach Jody Wynn and her women's basketball staff.

Wilson is a high-energy and athletic prospect that competes at a high level and has very good potential as a college prospect.  One of the lesser known top-rated prospects in the West after her junior season, Wilson was still a bit of a sleeper prospect entering the spring but raised her college recruitment with strong performances on the club circuit while traveling with her club program, Arizona Blue Star coached by Dana Hawkins

Last season as a junior for head coach Candice Gonzales, Wilson, once again, led a well-balanced attack for Mesquite - leading the team in scoring with 13.5 points per/game.  She also collected 6.4 rebounds and 2.5 assists per/game as well.  Wilson had just as good a season as a sophomore starter for Mesquite, and has played at the varsity level in each of her three seasons at the Mesquite program.  Wilson will enter her fourth season at the varsity level this season.

A coach's dream, Wilson is a hard-working prospect that competes on both ends of the floor, and plays with excellent agression and intensity.  Her best attribute is her ability to defend opposing players and also slash to the basket, where she is a good finisher.  She is a good open court player and thrives in the open floor.  She is also a solid shooter of the basketball and is a good ball handler, that is able to play as a shooting guard or as a small forward - as needed.

Wilson is primed to have her biggest season of her high school career this season, in her final senior season for Mesquite - leading a team that will return many of their players from last season and compete with the state's top teams in the Division-I Class this season.

Congratulations to Wilson on her commitment to a division-I program, as she should develop nicely into an instant contributor for the Long Beach State program.