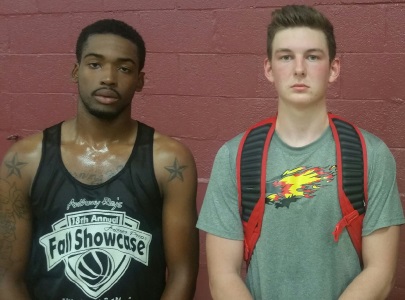 The  18th Annual Arizona Preps Fall Showcase, Arizona’s original showcase basketball event, was held this past weekend on the campus of American Indian Indian College (SAGU University).  The event was held on Saturday and Sunday for high school and junior high aged boys.

Mead is a lesser known prospect in the 2017 class - a player that most basketball enthusiasts in the state still have not seen since he did not play for an AIA high school program last season.  Mead led his school to a big CAA State Championship - defeating #1 ranked Tri-City Christian in the state final, 61-60.  Mead and his confident teammates last season would lead Student Choice (21-4) to their first ever CAA state title in their school's history, and also the biggest single game victory in school history.

Elijah Mead proved in this year's event that he is among the best 2017 prospects in the state, and one of the most talented guard prospects I have seen in the class.  Mead is an athletically gifted guard prospect with a nice handle of the basketball and a strong ability to get to the basket and finish.  He is also an excellent shooter of the basketball with good range on his shot.  A jump-shooter, Mead is able to catch and shoot or score of the dribble.  He also possesses a very nice mid-range game.

Mead thrives in an uptempo style of play and is very good in the open court.  Mead has the potential and ability to play at the low to mid-major division-I level after high school, and is now regarded by our staff as one of the top 3 unsigned prospects in the state.  Mead is currently receiving heavy interest from numerous junior college programs around the country.

Chaparral High School's gifted guard prospect, 6-foot-2 senior guard Colton Kresl is among the most talented performers in the state - regardless of class.  A big-time scorer of the basketball, Kresl is a big-time scorer from the guard position, and he has a superior knack for making shots from anywhere on the floor.  He has the ability to keep his handle alive in the most difficult situations and pass with either hand.  He is an excellent shooter with excellent range on his shot.   He is also able to shoot the basketball from the stand-still position or while on the move.  He can create for himself or others off the dribble, almost at will.

Kresl is also an excellent ball handler and a solid passer of the basketball.  Fundamentally sound, Kresl is a complete offensive guard.  Kresl is also among the top 3 available prospects in the state.

Our staff would like to congratulate both of these young men on their performances this weekend, and wish them both excellent senior seasons this year.