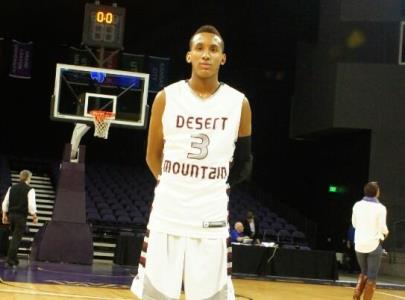 For Desert Mountain High School's 5-foot-11 senior point guard Gino Littles, it has been a long road filled with hard work and determination.  While competing with many of the state's top overall prospects over the years, Littles has waited for his opportunity to flourish.  The son of former ABA player and also NBA coach Gene Littles, Gino has emerged over the past year as a serious player and a college prospect.

I first noticed Littles serious development last spring and summer on the AAU/club circuit, while playing for his club program the Arizona Stars.  Littles showed that he had the ability to compete with the top players in the West - possessing a high level of confidence  in his ability to play the game and produce at a consistent level.  Littles also performed very well in a pre-season fall event organized by Chad Groth, and played the best I have seen him play.

Littles has carried over his strong development as a player to the high school season for his Desert Mountain program.  After playing a strong role for the team as a junior, Littles has stepped up his play this senior season - averaging strong numbers for Desert Mountain.  Littles is averaging 7.2 points and 3 assists per/game, and is coming off a career high of 16 points in a win over Westwood HS and also 7 assists in a win over Horizon HS.

This young man has developed a great deal throughout his high school career, and will now look to really step up his play this season for Desert Mountain (12-12), after the loss of 6-foot senior guard Rolando Rhymes from the team.

Littles will also look to land himself an opportunity this spring to play at the collegiate level, and will focus on continuing his development as a player at the next level.  Littles is a smaller guard prospect that has grown physically a great deal over the past 3 years, and has good upside for the position.  Possessing rich basketball bloodlines, this young man will look to reach his full potential as player over the next 3 to 4 years.

Littles is a pure point guard prospect that likes to run a team and get others involved on the court.  His ability to handle the basketball and make plays for himself off the dribble allows him to set up his teammates for scoring opportunities.  He has also improved his ability to shoot the basketball with range and has become very consistent from the floor.

Littles is a poster child for hard work, proving that it is not where you start but where you finish.