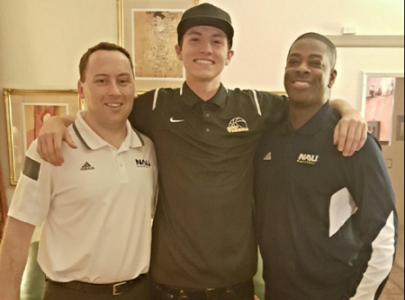 It has been a long road for Gilbert High School's 6-foot-7 senior wing Chris Bowling.  After being on the recruiting board for sometime and getting tired of the recruiting process, Bowling has mulled over his options for the future hard this spring - debating over making a college decision soon, based on the offers he current has on the table, or playing through the spring club season in pursuit of more offers.  After careful consideration of both options, Bowling has decided to make his college decision - electing for a local division-I program.

On Thursday afternoon, Bowling made his decision to play next fall for Northern Arizona University, and accept an opportunity from head coach Jack Murphy and his staff to play for the Lumberjacks' program.

Throughout Bowling's high school career, Bowling generated loads of division-I recruiting interest, but did not receive as many scholarship offers as it was thought that he may have deserved.  Bowling received serious interest from such schools as Arizona State, Oregon State, Boise State, New Mexico, Hawaii, Nevada, Southern Utah, Denver, Cal State Bakersfield, Texas State, Weber State and San Diego.

Bowling took one official recruiting visit to Northern Arizona, and it had looked as if Bowling would elect for the Lumberjacks much earlier, but he still remained open in his college recruitment.

While Bowling is very thin physically, he has loads of talent and athelticism in his long frame, and is a very good shooter of the basketball, although he can be streaky at times.  Northern Arizona is really getting a steal here.  Bowling's best performance of his career came last summer when he led his Arizona Magic 17U team to a tournament championship at the Pangos Sweet 16 Tournament in California.

Congratulations to Chris and his mother Sarah on this decision from our staff here at Arizona Preps.

Arizona Hoop Review Scouting Report:  Bowling's length and athleticism are nice attributes that he possesses, but when you consider his nice ability to shoot the basketball and stretch the defense with excellent range on his shot, he becomes a formidable prospect.  Bowling is still really thin physically, but is still very young for his age and should fill out nicely over time.  As he matures physically he should develop nicely at the next level. He is a good ball handler and passer – a fundamentally sound performer. A solid rebounder, but as he gains more physical strength and size, this is an area of his game that should pick up.  A solid defender that uses his length to get his hands on balls and deflect passes. A very good overall prospect that is currently underrecruited.  A very good sleeper prospect.