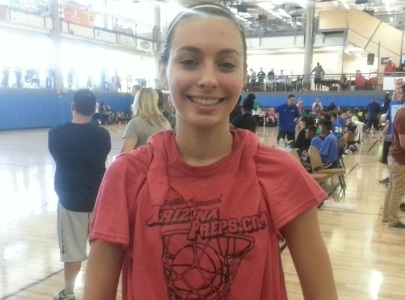 With the start to this year’s exciting 2013-2014 high school basketball season upon us, let’s take a hard look at some of the players to watch this season.  These are players that I expect to have breakout seasons this year and develop into breakout performers among the state’s top overall prospects.

One rising junior top performer is Pinnacle High School's hard working and dedicated 6-foot junior forward prospect Allison Munoz.  After emerging in this year's recent Arizona Preps Fall Showcase, this young lady looks prepared to develop into a serious player and a prospect in the state.  While she is not currently considered amongst the state's top girls prospects in the state, she has shown the potential and skillset to develop into a serious player over time.  As a result, Munoz looks prepared to have her best high school season, and a breakout season for Pinnacle head coach Troy Wiese.

Munoz is a talented wing prospect that is capable of handling the basketball well and also knocking down shots from the perimeter.  While being very thin still physically, Munoz will reach her maximum potential as a player over time as she gains muscle and size to her frame.  While it will take her some time to add size to her thin build, she should develop at a good pace over the next two years, and should begin to realize her potential as a player by her sophomore or junior season of college - a prospect with a very high ceiling.

Munoz has very good length of body and runs the floor very well.  She also is very skilled and should develop into a deadly shooter with good versatility over time.

Watch out for Munoz this high school season, as she looks to become one of the better girls prospects in Arizona's 2015 class of prospects.