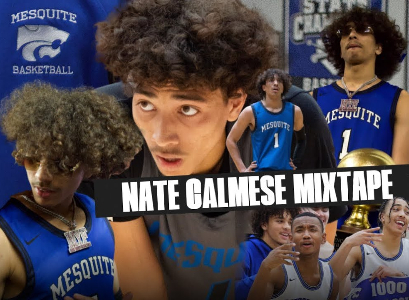 The top available Arizona high school prospect in Arizona's high school ranks, Mesquite High School's star senior guard Nate Calmese has found his fit, and has given a verbal commitment to Lamar University, a member of the Western Athletic Conference (WAC). Calmese recently took an official recruiting visit to the school, and after taking some time to mull over his recruiting options, Calmese has given a verbal pledge to Lamar.

What was most exciting in this recruiting process, was that former Arizona Western Junior College Head Coach Charles Harral, now an assistant coach with Lamar, returned to his roots and was able to reel in Calmese, after already recently landing top-rated ACCAC sophomore prospect Adam Hamilton from Glendale JC. Harral got two steals from the state's 2022 Class, and the addition of Calmese should prove to be an excellent addition for their program.

Calmese dominated the state all high school season - leading his Mesquite High School program to the school's first ever 4A State Championship, and an impressive 27-3 overall record on the season.

Calmese averaged significant individual numbers on the season, posting 31.4 points, 4.7 assists, 5.5 rebounds and 2.6 steals per/game - some of the best individual numbers in the country by an individual player. Calmese did all he could personally to help lead his teammates to a state title this season, and he was successful in his efforts - leading Mesquite to the 4A State Championship in fine fashion, as the team was not nearly a favorite to win a state title, but Calmese and his teammates willed their way to winning it all. Calmese's half-court shot to defeat 4A defending state champion St. Mary's High School in the 4A State Semi-finals, will be remembered for many years to come, and highlighted the miraculous high school season that he had.

Calmese is a unique guard prospect, as he is a terrific combo-guard prospect that enjoys having the basketball in his hands and making plays from either guard position. He has an excellent feel for the game and can make plays at ease, as a scorer or as a facilitator. His natural position though is as a point guard, so don't let his unique scoring prowess fool you. He is at his best as a point guard, where he is a handful for opposing guards to defend. Calmese has a pure shooting stroke with range, but is at his best when scoring off the dribble, where he has a strong handle of the basketball and is able to create off the dribble at a high level. He is always looking to make a play, which often times leads to scoring opportunities for his teammates. A very unselfish performer, Calmese makes players around him much better, and is a winner. He is also an excellent defender with quick hands and feet, and has excellent anticipation on the floor, which allows him to play passing lanes and put pressure on opposing guards. He is also a very good rebounder from the guard position, as a result of his good size as a guard, and competitiveness. He is a winner and is willing to do whatever it takes to win.

For all of his efforts this past season, and for his amazing overall performance throughout the season, Nate Calmese was also selected as our 2022 Arizona Preps Boys Player of the Year.

Congratulations to Nate and his family on this accomplishment, as well as the Mesquite basketball program from our staff here @ Arizona Preps.