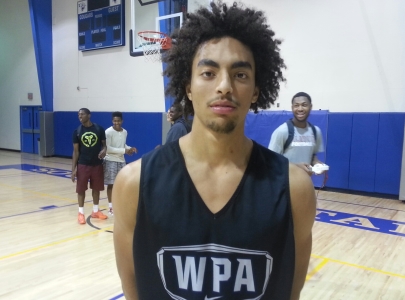 Now that we have reached the conclusion to the 2013-2014 high school basketball season, our Arizona Preps’ staff is proud to release our individual awards for the season.

The 2013-2014 boy’s high school basketball season was one to remember – filled with loads of talented prospects, many of whom will move on to the collegiate ranks next year.  Our selection for this year’s 2014 Arizona Preps Boys Player of the Year is Westwind Prep Academy 6-foot-3, 180-pound senior guard Lyrik Shreiner.

While there were many candidates for this award this season, no player did as much and changed the complexity of their college recruitment in one season than Lyrik Shreiner.  After going three years of his high school career in almost complete obscurity to college coaches, Shreiner worked tirelessly on and off the court over the past year to raise his game and college recruitment.  After numerous strong performances this season at Westwind Prep, Shreiner saw his recruiting stock soar – reeling in college recruiting interest from numerous high-major division-I programs.

While Shreiner had many offensive and defensive outbursts this season, none was more impactful than his scoring explosion this season where Shreiner exploded for 65 points – breaking the Arizona high school state scoring record on 26 for 27 shooting from the field in the game.  Shreiner also recorded a team-high 24 points in a narrow road loss to top-ranked Findlay Prep (NV) - a game in which he also held top-rated nationally ranked Kelly Oubre (Kansas signee) to 7 points.

With many college programs now looking to recruit Shreiner, the first school to show him serious attention was current national champion, University of Louisville.  Louisville offered a scholarship to Shreiner this season as a result of his performances.  Shreiner would take his first official recruiting visit to Louisville, where he took in all that the elite college program could offer him.  While being hosted by the school’s coaching staff and players, Shreiner got a valuable opportunity to witness the preparation and commitment level of the nation’s defending champions.

Shreiner in one season has developed into one of the hottest prospects in the country - now being recruited by such college programs as Baylor, UCONN, Missouri, Memphis, Washington, UTEP, Washington State, San Diego and Grand Canyon.

Shreiner has indicated to me that he will reclassify next season and attend post-graduate school - making him now a 2015 college prospect.  Currently a 2014 prospect and still only being 17 years of age, Shreiner could benefit a great deal from another year of preparation before entering the collegiate ranks.  Shreiner would have time to get stronger physically, while having another club season to compete against the nation’s top prospects.  As a 2015 college prospect, Shreiner becomes a much more valuable asset to a college program.

Shreiner advised me that he is in no rush to make a college decision and will weigh his options first before making his decision.  Lyrik Shreiner is an inspiration to student-athletes everywhere, and is quickly becoming a hero to the state of Arizona, and especially in the West Valley where most prospects have always flown well below the recruiting radar.

Congratulations to Lyrik Shreiner on an amazing season and also on this impressive accomplishment from our staff here at Arizona Preps.