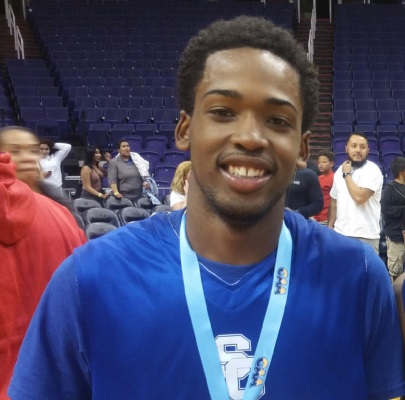 With the recent end to the 2015-2016 high school basketball season, Arizona's 2017 class of prospects is now preparing to take center stage on the spring and summer AAU/club circuit.  One prospect in the class that now has seen his recruiting stock increase a great deal amongst our Arizona Preps' basketball staff is Student Choice Prep Academy 6-foot junior combo-guard prospect Elijah Mead.

Mead is a lesser known prospect in the 2017 class - a player that most basketball enthusiasts in the state still have not seen since he does not play for an AIA high school program.  Mead and his Student Choice high school program participate in the Canyon Athletic Assocation (CAA) - a league of charter schools in the state.  While our staff has not historically covered many charter school teams throughout the years, this season our staff saw many of the games in the league and came away very impressed with the play of Mead, as he led his school to a big CAA State Championship - defeating #1 ranked Tri-City Christian in the state final, 61-60.  Mead and his confident teammates would lead Student Choice (21-4) to their first ever CAA state title in their school's history, and also the biggest single game victory in school history.

Elijah Mead proved this high school season that he is among the best 2017 prospects in the state, and one of the most talented guard prospects I have seen in the class.  Mead is an athletically gifted guard prospect with a nice handle of the basketball and a strong ability to get to the basket and finish.  He is also an excellent shooter of the basketball with good range on his shot.  A jump-shooter, Mead is able to catch and shoot or score of the dribble.  He also possesses a very nice mid-range game.

Mead thrives in an uptempo style of play and is very good in the open court.  He is a gamer, and always seems to step up his play a great deal in big games, which he definitely did in the CAA state final - scoring a game-high 28 points in the final and making big shot after big shot against a defense focused on slowing him down.

Mead has the potential and ability to play at the low to mid-major division-I level after high school, and is now regarded by our staff as one of the better guards in the state - regardless of class.  This summer will be very important for Mead in attracting college coaches and exposure to more regional scouts and media.

Hopefully, Mead will get an opportunity to showcase his skills this off-season in front of the right people.  He definitely deserves the opportunity.

Our staff will follow Mead this club season and look to bring you any recruiting updates for this young man, as his recruitment develops.