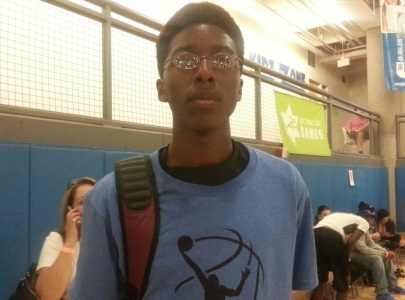 As the state’s top pre-season event just before the start to the 2013-2014 high school basketball season, each of these top-rated prospects will be ones to watch this up-and-coming high school season.  Here are my top boys performers from this year’s event, continuing with the 2016 sophomore class.  I am very excited about this young and talented group of prospects . . .

- Kirby has develop a great deal since the last time I saw him, and now he looks to be among the top-rated young prospects in the state.  He has a tremendous upside with the potential to become an elite high-major prospect over time.  The younger brother of former Basha HS graduate and current Virginia Tech freshman post Maurice Kirby.  This younger version is a much longer and more athletic prospect that has the ability to play both forward positions on the floor.  He is an active rebounder and a big-time shotblocker that changes or alters shots, even outside of his area.  Kirby is still developing a great deal and has a lot of work to still do, but at the progression he is headed - look out.

- Whitaker is a sure-fire young talent with excellent potential for the future.  Already possessing good size and length, Whitaker is also very athletic with nice pop off the floor.  He is a good mid-range shooter and is capable of scoring either with his back to the basket or while facing the basket from the perimeter, where he is also able to put the basketball on the floor and create plays for himself.  A strong finisher already that should develop over time in this area as he matures physically.  An active rebounder and shotblocker.  Has a high ceiling for the future.

- Among the elite scorers in the class already, Brunkhorst is coming off a strong spring and summer performance where he made his move up the 2016 class rankings.  The son of former University of Arizona legendary player and also former division-I assistant coach Brock Brunkhorst.  A very skilled combo-guard prospect that is able to score in a variety of ways. He can score off the dribble behind a nice mid-range game which allows him to get shots for himself, or from the perimeter where he is a deadly three-point shooter with nice range on his shot. He is also a good finisher in the lane – an area of his game which should continue to get better over time with added physical strength in the future.  A good ball handler, which makes him capable of playing both guard positions on the floor. He also has very good court vision and a nice overall feel for the game.

- A nice and talented young point guard prospect with excellent potential for the future.  Gates has a very slick handle of the basketball and a nice overall feel for the game.  He pushes the basketball up the floor and sees the floor well - able to make players around him better already with his ability to create and also get into the lane and finish.  Gates has a nice perimeter jump shot that will need to continue to become more consistent over time to open up his ability to penetrate.  A nice slasher and finisher in transition.  has a bright future ahead of him.

- Bowling is a prospect that has burst onto the Arizona recruiting scene big-time as of late - gaining serious attention from local scouts and media.  An excellent shooter with good size and length already.  Has unlimited range on his shooting stroke and good overall upside for the future.  A good rebounder.  Good overall defender with nice toughness.  A young man that is seeing his college recruitment already begin to soar.  Among the top young prospects in the state.

- Zane is another nice recruiting target for the future in the state and another prospect that has really come on as of late.  A sharp-shooting prospect with a very good overall feel for the game and an excellent shooting stroke already.  Has very good toughness and plays with good aggression.  Good finisher.  Good ball handler and passer.  Has a bright future ahead of him.

-  Gardner is a long, rangy and skilled wing prospect with a nice ability to shoot the basketball with range.  He possesses a high basketball IQ and a nice overall skill-set for the position.  He also has a nice handle of the basketball for his size and is also a very good passer.  A solid rebounder, and an improving defender.  Still needs to add some serious physical size to his thin frame to reach his maximum potential, but he has time.  Among the top overall prospects in the class.

- Elliot is a nice physical talent with very good upside as a four-man prospect.  Still growing a great deal, this young man could and should finish at 6-8 in height.  A tough, hard-nosed post player with good aggression, Elliott competes hard for rebounds and is a good finisher inside the paint.  A left-hander, Elliott is a good shooter from mid-range.  Has good overall low-post skills.  Runs the floor.  Capable shot-blocker.  Has the potential to become an excellent college prospect.

- A big-time shooter with a nice body.  Has unlimited range on his shot.  Father is 6-7 in height, so this young man could grow a great deal over time.  An excellent competitor with very good toughness.  Solid ball handler and passer.  Three-sport star, so a very good athlete overall.  Has the potential to become one of the better guard prospects in the state.