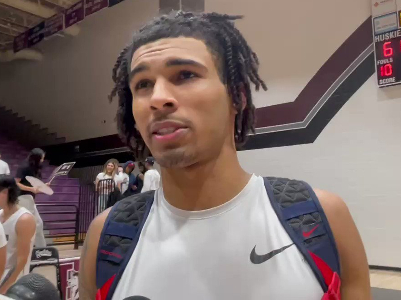 After a super long wait and a very long recruiting process, the wait is finally getting close to an end, after Hamilton High School graduate Quincy Adams received a big offer from Ball State University on Thursday afternoon. While Adams had received numerous Division-II offers up to this point, his Ball State offer becomes his first true Division-I offer to date, and is a nice one for Adams - a strong mid-major offer from a college program in the MAC Conference.

It seems that it will be just a matter of time for Adams to commit, after such a long wait for him and his family, as Adams looked to generate a Division-I offer for himself. After a long waiting period, new Head Coach Michael Lewis and his staff extended an offer to Adams, as he is definitely one of the best available prospects in the West, but has flown well below the recruiting radar for some time, due to the size of the current NCAA Transfer Portal. With very few Division-I college programs recruiting high school seniors this year, Adams seemed to be a casualty of this new recruiting tool. It is expected that Adams will soon schedule an official visit to Ball State, where a commitment could be imminent for him.

A very athletic wing prospect, Adams is a skilled and athletic performer that thrives in the open floor and when slashing to the basket. This season, he had to develop his ability to play in the half-court set, while running Head Coach Doug Harris' offense all season and leading his team in numerous tight battles. He has a left-handed shooting stroke with range and exceptional athleticism as well, that allows him to finish above the rim in traffic or in the open floor. He has good overall versatility as a player and can play and defend several positions. He is a good ball handler. Adams is a very underrated sleeper prospect for a college program.

Adams is coming off a strong performance during his senior season, where he helped lead his Hamilton Huskies to a runner-up finish for the 6A State Championship - falling to Perry High School (48-38) in the state championship game. In the process, Adams was the catalyst for Hamilton and their top individual performer throughout the season. A native of Texas, Adams moved to the state as a senior and was immediately inserted into the list of top performers for the 2022 Class, after numerous big early-season performances for himself.

I will continue to follow Adams and his recruitment closely, and bring you any updates as they continue to develop.