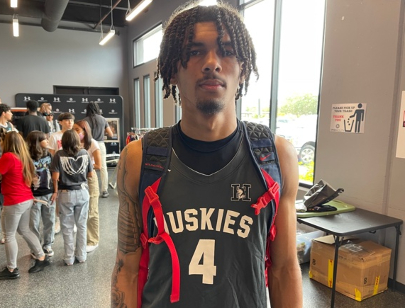 Hamilton High School's talented and athletic 6-foot-5 unsigned senior guard / forward Quincy Adams is still considering his options for his immediate future. While he would like to play Division-I bsketball and he is well deserving of getting there, Adams may need to take a different route to reach his goals. In a year where the NCAA transfer portal is the driving force in college recruiting, Adams has had to overcome a significant lack of college recruitment, due to him simply not being seen by enough coaches. As a result, Adams is now considering numerous options for himself for his future.

Adams has definitely received his share of Division-II interest this spring, but he has yet to recieve much serious Division-I college recruitment. As a result, Adams is now considering many different options for hismelf, including a year of post-graduate play, attending a junior college or going the Division-II route. Each option will help him at this juncture, since there isn't a lot available to athletes in the way of scholarships right now, it just depends on what route is the best for Adams, and he and his family will need to make that decision.

Currently, Adams continues to work out with individiual trainers, and played this spring with The Firestorm club program.

Adams is coming off a strong performance this junior season, where he helped lead his Hamilton Huskies to a runner-up finish for the 6A State Championship - falling to Perry High School (48-38) in the state championship game. In the process, Adams was the catalyst for Hamilton and their top individual performer throughout the season. A native of Texas, Adams moved to the state as a senior and was immediately inserted into the list of top performers for the 2022 Class, after numerous big early-season performances for himself.

A very athletic wing prospect, Adams is a skilled and athletic performer that thrives in the open floor and when slashing to the basket. This season, he had to develop his ability to play in the half-court set, while running Head Coach Doug Harris' offense all season and leading his team in numerous tight battles. He has a left-handed shooting stroke with range and exceptional athleticism as well, that allows him to finish above the rim in traffic or in the open floor. He has good overall versatility as a player and can play and defend several positions. He is a good ball handler. Adams is a very underrated and is an excellent sleeper prospect for a college program.

It will be very interesting to see which direction that Adams will go for his immediate future, as he has the potential to develop nicely with the right situation, and showcase his talents. A year of post-graduate play would benefit him a great deal, as he would mature and be able to showcase his individual talent for another year, while the right juco would also benefit him in his college recruitment, and playing against much better and older competition would also benefit his pursuit as well.

I will continue to follow Adams and his decision for his future closely, and bring you any updates as they continue to develop.