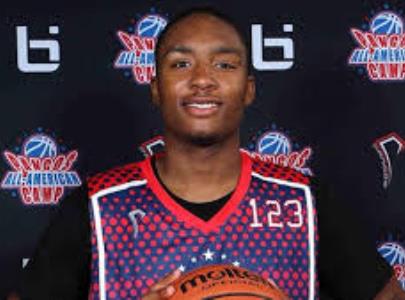 When we last spoke about top-rated transfers coming to the state of Arizona, one of those big-time transfers is 6-foot-1 junior point guard prospect Tyrek Chambers.  Chambers recently moved to Arizona via New York where he attended Christ the King High School.  Chambers has now landed at Desert Vista High School where he will play for the Thunder this season - making the Thunder now the definite favorite to win the state title in the state's 6A Division this season.

Chambers is a top-rated point guard prospect from New York that has had to overcome serious obstacles in his life to get to this point.  Chambers was shot several years ago and overcame a bullet wound to return to the basketball court, and dominate his competition.  While a product of the city streets, Chambers was able to utilize his skillset in basketball to make a better way for himself, and now he will pick up his high school career in Phoenix, Arizona where he will now play for second year head coach Gino Crump.

Also teaming up with the group will be recent Skyline High School transfer, 6-foot-3 talented junior shooting guard J'Saan Strover.  Strover is coming off one of the best sophomore seasons in the state, as he averaged better than 20+ points per/game last season at Skyline.  Strover will now look to team up with Chambers and Isaiah Wilson in the Thunder backcourt for the next two seasons.  There are some very good backcourts in the state, and this will now definitely become one of them, if not the best.

Chambers is a very skilled and electric guard prospect that likes to make plays off the dribble, while also possessing a very good shooting stroke with excellent range.  He likes to handle the basketball as much as possible, and create scoring opportunities for himself and others also as often as possible.  He is an excellent ball handler that can get to where he wants on the floor, and also get into the lane and finish with a variety floaters and layups.  He pushes the basketball up the floor and is a floor general with the basketball in his hands.  A New York guard.

Chambers is also a very good defender that sits low defensively and has excellent on the court anticipation, which leads to steals and deflections in the open floor.

Chambers is also recently off a good performance in this summer's Pangos All-American Camp in Los Angeles, CA in June.

Welcome to the state of Arizona Tyrek Chambers from the Arizona Preps' staff.  The state's level of basketball talent just got better.