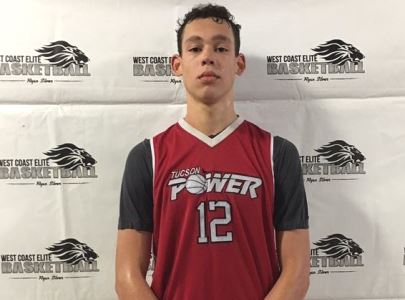 On Friday evening, I had an opportunity to watch one of the more promising young prospects in the state of Arizona, as Pusch Ridge Christian Academy traveled to Chandler to take on top-ranked Valley Christian High School.  One of the top programs in the state consitently for many years and one of the elite teams in the 3A Division, Valley Christian (23-3) has been terrific this high school season once again - winning their last 12 games in a row on the season, and defeating Pusch Ridge Friday evening 58-42.

While Pusch Ridge (14-14) would struggle as a team against a very well coached group from Valley Christian, I came away very impressed with the future potential and upside of 6-foot-9 sophomore post Lucas Elliott.  The nephew of former University of Arizona basketball legend and NBA star Sean Elliott, this younger Elliott is a promising young prospect in Arizona's 2019 Class.

Lucas Elliott is a nice-looking young post prospect that is developing quickly as a college prospect.  He has really improved a great deal, just since the last time I saw him perform in the fall.  He runs the floor very well, and has excellent energy on both ends of the floor.  He is fluid runner and gets good position on the low block, where he is able to now complete solid low post moves with developed low-post footwork.  He is a good finisher that has improved a great deal, as he is getting physically stronger these days through maturity.

Elliott is a very good rebounder on both ends of the floor, through his tenacity and work ethic inside the paint, which allows him to compete for rebounds and also rebound outside of his area on the floor.  Elliott still does not seem to get too many offensive touches often down the floor, so he works to get his hands on the basketball as often as he can.  As he matures physically over time, that will change a great deal, as his teammates will definitely look to him more often on offesnive trips down the floor.

Elliott is a capable shotblocker now, as he possesses a 7-foot wingspan.  Over time I predict that he will grow to 6-11 in heigth, and will become an imposing shotblocker - a nice asset to him as a college prospect.

Elliott is among the elite prospects currently in Arizona's 2019 Class, and is quickly rising up our list of player rankings for the class.

He currently possesses two different division-I offers for himself from Portland State and Northern Arizona, and is receiving loads of division-I interest already from such schools as Arizona, Stanford, Grand Canyon, New Mexico State, Montana and Air Force, with many more schools now looking to get involved.

As more college programs catch a glimpse of Elliott this spring and summer on the AAU/club circuit, look for Elliott to generate much more recruiting interest and bring home many more offers as well.

Lucas Elliott is a young budding prospect in the state of Arizona that will definitely carve out his own basketball future.  He has only been playing the game of basketball seriously for a short period of time, so his upside is glaring.  This young man has a very bright future ahead of him.