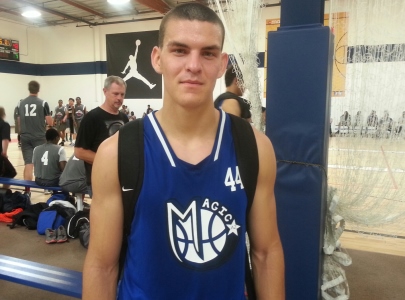 While Arizona's 2015 class of prospects does not look to be anywhere near as strong as the predecessor, 2014 class, there are numerous prospects this spring that have emerged as strong prospects in the class.  One emerging prospect in the class is Tucson product, Catalina Foothills High School 6-foot-3, 190-pound guard prospect Dakota Kordsiemon.  After a strong junior season this year, Kordsiemon has emerged as one of the top overall prospects in Arizona's 2015 rising senior class.

Kordsiemon helped lead Catalina Foothills HS this season to a strong 23-7 overall record on the season, before losing by a narrow margin to eventual state champion Shadow Mountain HS, 72-70, in the Division-II state semi-finals.  While being coached by former Tucson star performer Doug D'Amore, Kordsiemon averaged 10.2 points, 4.5 rebounds and 2.2 assists per/game this season - numbers that should improve dramatically next season as a senior.

Since suffereing the disappointing defeat in the state playoffs, Kordsiemon has focused this spring on his college recruitment and is off to a strong start for himself on the AAU/club circuit.  While playing for his club program, the Arizona Magic Pump N Run 17U team, Kordsiemon has been put in a position where he has had to lead his team against some adversity already during the club season - as his team has underperformed during the spring evaluation period.  While the team has had some struggles, Kordsiemon has been a consistent top performer throughout the spring - proving that he is a division-I talent for the future.

As a college prospect, Kordsiemon attacks the basket with his strength off the dribble, and can shoot from the outside with nice range on his shot as well.  He has a chiseled body, unlike many prospects his age, which allows him to be a strong contributor on the glass - allowing him also to play much bigger than his stature suggests.  He is also very tenacious on the defensive end of the floor, and often times will be seen guarding the opposing team's best player.  He has an excellent motor and does not take plays off.  He is the heart and soul on every team he plays on.

Kordsiemon will still need to get a little quicker and continue to improve the consistency of his long range jump shot to reach his maximum potential as a college prospect.

Currently, Kordsiemon is hearing from numerous low to mid-major division-I college programs, and advised me that he really likes Boise State as a college program that he would like to play for in the future.  Only time will tell, but he should receive his share of offers after a strong summer performance on the July club circuit.

I will be keeping a close eye on Kordsiemon the remainder of this spring and also through the summer months, as this young man continues to develop into a serious college prospect for the future.