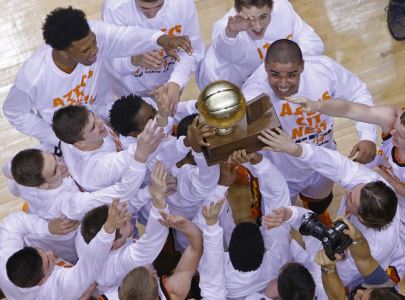 The 4-peat is now complete for Corona Del Sol High School!  Unreal and consistent total dominance from the Aztec basketball program, that won their 70th game in a row against Arizona high school competition on Monday evening at Gila River Arena.  The 70th consecutive victory also meant a fourth-straight Division-I State Championship for the Aztecs.

It was thought to be a very good contest between Corona (33-1)and a talented Desert Vista ballclub, especially after Chaparral High School gave the Aztecs all they could handle in the semi-finals on Saturday.  But that would be very far from reality, as Desert Vista would struggle from the jump - falling to Corona Del Sol quickly and mightily, 57-32.

Corona is the state's most talented team, led by the state's most imposing prospect - 6-foot-11 freshman post Marvin Bagley Jr.  The impressive duo of 6-foot-1 sophomore guard Alex Barcello and 6-foot-6 senior forward Dane Kuiper (University of New Mexico signee) aren't too shabby either.  While Corona is absolutely loaded with talent, they are not deep at all.  Corona head coach Sam Duane Jr. does not go far into his bench - playing only 7 players, with 5 players seeing much of the playing time.   This is what is also so impressive about this high school season for Corona.  Even while only playing 5 to 7 players all season long, the Aztecs were able to withstand each opposition they faced - without any serious injuries or even any reall foul trouble all season long.  Wow!  Another excellent coaching job by Duane.

On Monday evening, the Aztecs starting five looked extremely fresh once again, as they jumped out to a big 31 to 13 lead by halftime.  Marvin Bagley looked like the pro that he will soon become in the future in the first half, as he blocked almost every shot inside the paint, grabbed double-figure rebounds and dunked everything anywhere near the paint.

Desert Vista had Corona on the ropes in an earlier meeting this season at Corona Del Sol - a game that was standing room only.  But this time around, rather than seeing a Desert Vista team loaded with confidence, rather we saw a team that had very little Thunder (their mascot).

Bagley would finish the first half with two ridiculous, monster two-handed dunks, and just as Bagley would rattle the rim and the backboard with his dunks, the Desert Vista team would continue to look rattled in the second half as well.  Corona would jump out to a 53-21 lead fter three quarters.

Corona would eventually go on to cruise to another state championship.  For 6-foot-4 senior forward Cassius Peat (Michigan State football signee), it would be his fourth state championship in each of his four years of high school basketball.

If this team can stay together, meaning that Bagley stays in Arizona and does not accept the lure to play for a powerhouse national prep program, forget about it.  Corona will win the next three state titles.  Only time will tell.