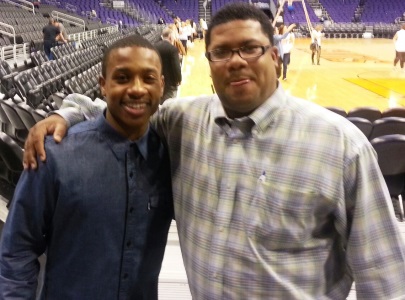 As the former AAU/club coach for current 2016 NBA All-Star selection, 5-foot-9 point guard Isaiah Thomas of the Boston Celtics, myself and our entire Arizona Preps' staff would like to congratulate our friend on his recent selection to the 2016 NBA East All-Star Team.  After being selected as the last pick of the NBA draft, this young man worked tirelessly to work his way to one of the game's biggests individual honors.

I can remember like it was just yesterday, but it was during the spring of 2006 when Isaiah would send me an email, stating that he would like to play for me and the Arizona Magic club program - playing alongside future NBA lottery pick Jerryd Bayless (Milwaukee Bucks) in the backcourt.  The dynamic duo would make up the best backcourt in the country that spring - defeating the #1 ranked team in the country, the Illinois Warriors (IL).

Thomas was a fiery competitor and was widely recognized for going off and exploding for huge scoring outbursts.  Thomas was not ranked anywhere near as high as Jerryd Bayless, but he was just as dominant on the basketball court - scoring at a high rate and also dishing out a large number of assists.  Thomas' ultra balanced attack with the basketball would earn him a scholarship offer from the Uniersity of Washington - an offer that Thomas would accept.  While committed to the Huskies, Thomas would continue to play with the Arizona Magic, while colleges would attempt to sway him from his commitment to Washington.

Very few people believed in Thomas as he overcame obstacles throughout his career, and no one ever believed he would make in the NBA, let alone be selected for an NBA All-Star game.  But he believed in himself from day one, always knowing he belonged.  For Isaiah Thomas, the tide has now turned, as players will attempt to reach his level.  He will become the hunted and no longer the hunter.

Congratulations Zeke!!!  So proud of you my man!!