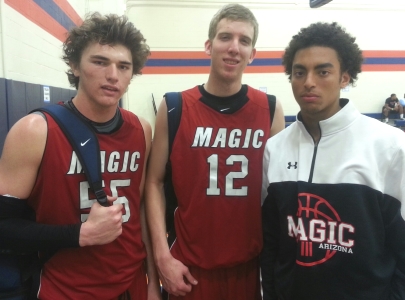 The Arizona Magic Pump N' Run-2014's, a team comprised of some of the state's top 2014 prospects, has been on an absolute tear this spring season.  After starting off the spring evaluation period with a tournament win at this year's Southwest Showcase Main Event, the team continued their terrific play in this year's Double Pump Hoop Fest in Los Angeles, CA - winning the big 17U championship in the event.

This past weekend, the Arizona Magic PNR-2014's would improve their club record in the spring to an amazing 12-1, and would finish in the semi-finals of last weekend's Double Pump Spring Classic in Las Vegas, Nevada.  This Magic team would eventually fall to a loaded Double Pump Elite (CA) team in the semi-finals of the event, but would prove that this team of low-profile prospects can get it done with the best of them.

The top-rated prospect on this team, Westwind Prep 6-foot-8 junior guard/forward Zylan Cheatham, has been absent the last two exposure events, while sharing time with the California Supreme (CA) for the Nike EYBL basketball circuit.  Without the services of Cheatham, this Magic team has continued to flourish.  Led by the strong play of Westwind Prep 6-foot-3 junior combo-guard Tate De Laveaga (Northern Arizona commit), this Magic group has continued to roll - now only losing one game throughout the spring.

"These kids play the game the right way and share the ball," said head coach Jeff De Laveaga.  De Laveaga preaches a fast-breaking style of play, predicated on tough defense and pushing the basketball on every possession.  As a result, this team is flourishing scoring the basketball and has numerous different players getting involved in the flow of the game.

The balanced attack by De Laveaga's group has been impressive thus far, and has this group playing some of their best basketball early in the spring evaluation period.  It will be very interesting to see just how good this team can be, as Zylan Cheatham returns to action with the team in May.

Congratulations to this group of young men on their strong play this spring and for representing the state of Arizona in fine fashion.