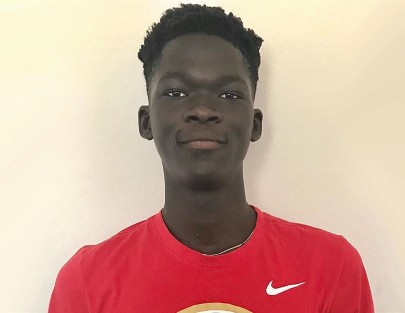 AZ Compass Prep surging 6-foot-11 rising junior post Adrame Diongue is a big-time talent that the nation does not yet clearly know about yet, but they are learning fast after the young man's recent stellar performance in last month's Pangos Best of Arizona League. In the league, Diongue showed off his serious upside, length and athleticism - leading to a recent offer from a program in the BIG-12 Conference.

After college coaches around the country observed the talented prospect in action on Ballertv.com during the event, Diongue, who did not then have any scholarship offers to his credit, received an offer from Texas Christian University (TCU) and their basketball staff. While the offer was the first one for the gifted Diongue, I look for this young man's list of offers to consistently grow over time, as more college coaches see him play and realize his tremendous potential for the future.

The decision by TCU to get in on Diongue very early was a very smart decision by their staff, as this young man's ceiling is limitless. Very rarely do you find someone of his size, tremendous length, range and agility, combined with a nice overall offensive skillset. His potential for the future and upside has me almost in amazement of just how good he can eventually become. He runs the floor like a guard and is agile for his size, which is so rare for 7-footers. He is still very thin physically, which makes it still difficult for him to finish over stronger defenders with size, but, over time, as he matures physically and fills out his lengthy frame, that will ultimately change. His length currently allows him to be very effective, as it does not take much for him to finish plays, and his nice bounce off the floor also makes it very easy for him to finish at the rim. As a result, he is already an absolute force defensively and blocks or changes many shots around the paint, where he has very good timing and keeps balls in play - leading to nice fast breaks for his teammates.

An African native, Diongue played his freshman season at Mount Zion Prep in Virginia, but chose to move to Arizona last summer (2019), to live with his uncle and guardian, former University of Arizona standout Mohammad Tangara. Tangara has been everything to Diongue, providing him with complete support in his transition from Africa just two years ago.

As a sophomore last season, Diongue first attempted to play for Chaparral High School, but due to some erroneous transfer rules, which were very unclear by the AIA and Chaparral HS, Diongue would only be cleared to play for the program's junior varsity, but not the school's varsity team. As a result, Diongue attended classes at Chaparral for an opportunity to receive the excellent level of academics at the school, but then later decided to transfer to Bella Vista Prep, where he ultimately played his sophomore season and developed under the leadership of Mack "Coach Mack" McGadney. Recently, Diongue decided to now transfer to AZ Compass Prep, where he will now play his junior season.

I will continue to follow the progress and development of this young man very closely over the next year, and look for him to become one of the top post prospects in the country for America's 2022 Class, over time.

Arizona Hoop Review Scouting Report: Adrame Diongue is a rare find anywhere, let alone in the state of Arizona. A mere rising junior prospect and still very young for his grade classification, this young man is extremely long, rangy, athletic and agile, and does many things on the basketball court that cannot be taught. He blocks and changes shots at a very high level and runs the floor very well, like a guard. His length allows him to finish plays well over defenders and from different angles around the basket. He is a good finisher as a result of his extreme length, and will really develop in this area over time as he matures physically and adds some serious girth to his now very thin frame. While he is still very thin physically, as he matures physically he will maximize his potential as a player. A very good shooter already with a soft touch from the perimeter and a fundamentally sound approach to the game. He has a very good jump hook in the low post and advanced footwork. He is an active rebounder that rebounds outside of his area, and is an excellent shotblocker with very good timing and keeps ball in play - starting the break for his team. Runs the floor like a guard. An excellent passer out of the low post. Wants to be great. Has unlimited potential and upside for the future.