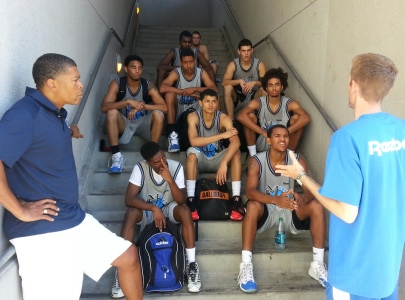 This week saw a new era begin in Arizona basketball, not just club basketball, as the Arizona Club Basketball League (ACBL) began this week at Red Mountain High School.   While the location of the league is absolutely as far as you can drive before you begin to believe you are leaving the state, it was well worth the trip this week as the state's top club programs gathered together to compete for the first week of action.

League organizer Kenny Mullins has done what no one ever thought could be done in this state among basketball club organizers - get everyone to organize and participate in a league where top-rated club competition meet weekly to test their skills against one another in preparation for the spring and summer club competition.

For many years, since club basketball began in the state of Arizona in the early 1990's, Arizona club programs have had to prepare quickly for the spring and summer evaluation periods through individual club team practices - creating an atmosphere where club teams would lack any real competition before traveling to compete against top-rated club teams outside of the state.  The result often leads to poor performances as Arizona student-athletes are left to adjust to much more physical competition on the club circuit.

Arizona high school basketball competition does not prepare Arizona's best basketball prospects for what they will face on the aau/club circuit.  As a result, poor initial performances on the club circuit often impact the college recruitment of Arizona's best prospects throughout the remainder of the club season.  Traditionally, only several club programs in the state have had any true success on the club circuit over the past 20 years.  Teams in Arizona such as the Arizona Stars, Arizona Heat, Arizona Magic, Arizona Cagers and now the Arizona Power had only had any true and consistent success on the club circuit.  These teams annually have been comprised of much of the state's top talent annually - resulting in better performances.

Today, the state of Arizona has seen the development of many more club teams over the past 5 years, and so now there is a much greater demand for more competition between the state's top club teams.  In year's past, there were not enough club teams to create such a league as the ACBL, but not there are enough teams to make such a league in high demand.

Tournament organizers such as Ron Coleman, Chad Groth, Justin Peterson and Marc Beasley have created numerous events throughout the year that have helped club teams and players have venues to showcase their talents.  A club league is something that was needed to take Arizona basketball to the next level.  Kenny Mullins seems to have figured out an exciting format that will create competition and an arena for Arizona basketball enthusiasts to view the state's best club teams before the evaluation period.

The first week of this club league was terrific - featuring Arizona's top 17U and 16U club teams in action.  The first night was higlighted by numerous top individual performances and a final 17U match-up on the night which featured two of the state's elite club teams/programs, as Team Bibby defeated the Arizona Power in a terrific game.  While the game was very heated and intense, it doesn't really matter who won the game, as players and, most importantly the teams, got better on the night - simply through the elevated level of competition.  This is what this league is about.

"It was a great first night," said Mullins.  "I had to deal with some coaches after the games ended, but, overall, it was an exciting night."

Of course, there will be many club coaches that will want the best for their kids and teams, which will result in complaining and politicing with referees, but Arizona club coaches need to understand the value of this opportunity.  It will only raise the level of basketball in the state, and, ultimately, create an atmosphere for better basketball outside of the state.

I look forward to watching this league each week, as statistics are formed from each game and videos of the games are kept - allowing college coaches to view the games from their respective locations - a great recruiting opportunity and much needed.

Great job to Mr. Mullins, his staff and each of the club programs and coaches on providing this league for Arizona basketball players, teams, media, scouts and fans.  I, for one, am thankful that this league is here and look forward to covering it each week.  GO ARIZONA BASKETBALL