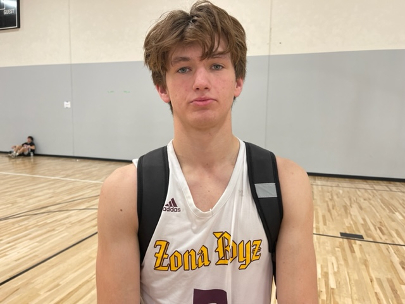 The Chaparral High School basketball program will look to rebuild next high school season, and the hopes of the Firebirds going forward will rely heavily on the overall play of 6-foot-4 rising senior guard Paul Oscislawski. After a good overall performance for himself as a junior, Oscislawski will now be relied on to take the next step in his leadership and play for his high school program, while also looking to gain recruiting interest for himself in his final high school season. Oscislawski is working very hard to raise his overall level of play and college recruitment.

Oscislawski is fresh off a trip to the University of Chicago, where he competed in a camp at the school with the program's staff. Oscislawski will also be making more trips to other programs of his desired interest, schools with strong academics and athletics.

In preparation for a busy summer of recruiting and play, Oscislawski is working very hard in the weight room and with personal trainers to raise his level of play and adding more to his already strong physical frame. Oscislawski has spent much of the last (6) months while working with such trainer aficionado's as Sidd Sharma of Explosive Institute. As a result, Oscislawski has become much more athletic and explosive, which has benefited him nicely in his overall play.

Last spring and summer, Oscislawski gained a lot of experience and game competition, and emerged as a top guard prospect in the 2023 Class. This spring and summer is different for Oscislawski, who is now focusing on gaining maximum college exposure. He is playing for the Team Zona club program, one of the best club programs in the state at promoting their players to college programs. Oscislawski is primed to have a strong showing for himself this summer, after having a good performance during the spring.

This young man is one of the toughest guard prospects in the state, as he is very physical and plays with superior aggression, an attribute rarely seen among Arizona prospects. He is very coachable and hard-working and absolutely loves the game. These traits will benefit him nicely in the collegiate ranks.

Oscislawski is a bigger guard prospect with excellent physical size. He is a bruising guard prospect with a strong handle of the basketball and a bullying aggressive style of play, which allows him to overpower smaller guards and be very effective inside and outside. He drives hard to the basket and does not mind physical contact. He draws fouls often as a result, and gets to the free-throw line quite often. He has a very good shooting stroke with range also, which sets up his strong drive to the basket. He plays at a fast pace, but has a strong change of speed and direction. He is very versatile as a player, as he can play multiple positions. Over time, his natural position will in college will be as a combo-guard, as he has a knack for scoring the basketball and also playmaking.

Oscislawski is also a strong rebounder as a result of his strong motor, size and toughness. He competes hard and follows his shot, which results in scoring opportunities for his team. He is a good passer that sees the floor and enjoys getting the ball to the open man on the floor. He will need to really focus on this area of his game over time, to maximize his potential as a guard prospect.

Last season, Oscislawski averaged good numbers for his Chaparral program - averaging 13.7 points and 6 rebounds per/contest. I expect him to raise his overall numbers substantially as a senior, as his team's success next season will be impacted a great deal by his production. I look for him to be one of the better performers at this month's Section 7 Event in Phoenix.

I will continue to follow his recruitment and play closely, as Oscislawski looks to bring it all home in the next (6) months - impacting his life and the future of his Chaparral program.