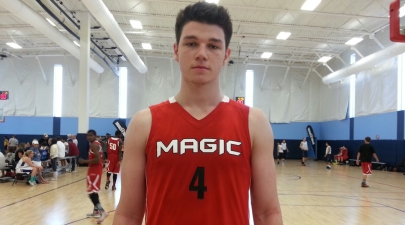 This weekend’s Southwest Showcase Main Event, hosted by Ron Coleman and the Avondale Sports Complex, kicked off the start of which looks to be to a very exciting and intriguing spring club basketball season here in the state of Arizona.  This two-day event sported a majority of the top talent in the state of Arizona from all levels and programs around.  The level of basketball that was played was very high for so early in the AAU/club season.

Of the games I watched at the two-day event, here are my top unsigned senior (2013) performers I saw perform (in no particular order) ...

Mike is a great spot-up shooter of the basketball, as well as off the dribble.  He can get past his defenders and to the basket pretty effectively, and has the vision to look up and find open teammates, if he is not able to score the ball.  He would be a great pick up for any college program and is one of the top unsigned PG’s in Arizona.  Mike has offers from Peru State, Concordia University (Cali.) and Arizona Christian University and is receiving interest from several D-II schools, including Chico State and Point Loma University.  Mike informed me that he is currently leaning towards Concordia University (CA) due to his family moving back to California.  He plans on committing April 28th after a viewing tournament in Las Vegas, where he will again run with the Arizona Rebels.

Kye is one of the top two unsigned SG’s available in the 2013 class out of Arizona, and should find a home very soon.  Kye shot the ball at an extremely high rate this weekend.  The smooth lefty was hitting shots off the curl, fade and spot up three’s with his lighting quick release, that makes it hard for defenders to put a hand up in time.  Along with a quick first step, he is very quick laterally and forces turnovers with good hands and looks up to find open cutting teammates.  His (8) 3-pointers sealed the deal in a huge win over AZ Power-Black, who has some of the best underclassmen talent in the state in Casey Benson, Jordan Howard, Connor MacDougall (Arizona State commit) and Jake Toolson (BYU commit).  Kye has offers from Idaho State, Sam Houston State, Notre Dame de Namur and Seton Hill University.  He plans on making a decision on a school sometime near the end of spring.

Jeremy is a great inside presence around the basket on the defensive end - forcing players who drive his way to alter their shot, which results in very low percentage shots for the opposing team.  He still blocks a majority of the shots that come his way and if he does not block the shot, will grab the rebound and look up for a teammate once he secures the ball.  His ability to run the floor with ease at 6-10 results in easy put backs and dunks around the rim for him on the offensive end.  He also has a great basketball IQ, and once he is double-teamed he sprays out to his open shooters on the wings.  Jeremy recently decommitted from Grand Canyon University, and has received interest from schools such as Long Beach State, Houston Baptist and University of Portland.  He is awaiting an offer soon.  He plans on making a commitment sometime near the end of May.

Everett was an all-state performer at his previous school in Springfield, Illinois - Lanphier HS.  He didn’t have a drop off when he transferred over to Westwind Prep here in Phoenix.  This weekend, Everett displayed that he is a very strong driver to the basket and uses his big frame to move and bully defenders once he gets a first step on them.  He can also hit the open 3-pointer with ease and has good vision to find open cutters when he is setting up the offense.  Everett informs me that he has offers from Western Illinois, Evansville, and a possible offer from UC-Riverside.  He is also receiving strong interest from Illinois State, Valparaiso and Southern Illinois University.  He says that he would like to commit with a school by the end of April.

Another out-of-state transfer into Jeff de Laveaga’s talented Westwind program, Miles hails from Homestead (CA) High School.  Miles had one of the best college-ready bodies I saw on any player all weekend long.  His massive shoulders, long arms and upper body strength allowed him to grab rebounds over every person who stood in his way.  He was always solid around the basketball, as he got constant put-backs all weekend long, which proved to be key buckets for his team.  If he develops a go-to post move and knocks down the 15-foot and out jumpshot, the sky is the limit for this kid.  Miles currently holds an offer from Idaho State, and is receiving strong interest from San Jose State, Western Illinois and the University of Nevada-Reno.  He plans on making his commitment sometime during the month of May.

While Miles is more of your typical “bang in the post” type of center, Namdi will get the crowd on their feet with athletic blocks and dunks around and over defenders.  Namdi, who is originally from the state of Texas, has the most potential of any of the senior prospects that I saw this weekend.  This 7-foot center runs the floor well for someone his size, and anyone who watches him can tell that his best basketball has not been played yet, due to his long lengthy arms, not fully developed frame and raw skills around the basket. Once he is put thru the rigors of a college weight room for a year or two, he will be a force to be reckoned with in whatever conference he chooses.  He holds offers from NAU, Idaho State and Alabama State, while also receiving interest from Memphis and Tulsa.

While Ryan did not play in the second day of competition, due to a back injury, he was sure something to watch the first day.  Berg reads his defenders perfectly and plays his offensive game according to what they give him.  He doesn't force any shots and plays very well inside the offense.  Like Kye De Laveaga, he is another lights out 3-point shooter, who can hit the spot-up, curl or fade, depending on what the defense gives him.  He is also a very underrated passer, as he hits the open man after he breaks down his defender off the dribble with a quick cross-over that few are able to guard.  He currently holds offers from Cal Baptist and Minnesota-Deluth University and is receiving interest from Seattle University, Saint Mary’s College and Hillsdale University in Michigan.  He told me that he has no time frame in making a commitment, but is just waiting for the right school to offer him.