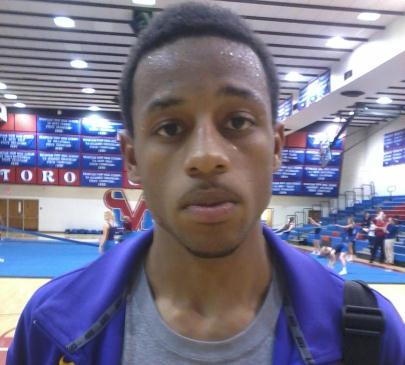 Talented and gifted 6-foot-4 junior point guard prospect Jalen Jenkins has left the state of Arizona and will move to the state of Florida for his junior season. Jenkins was regarded among the state's elite overall prospects.and a top-rated prospect in the 2015 class.
Share
Facebook Twitter LinkedIn WhatsApp Pinterest Email

On Saturday, February 16th I went to watch the Sweet 16 match-up of the #13 seed Dobson Mustangs versus the #4 Mesa Jackrabbits.  There was a vibe in the air like this was the final game of the year, and not a seat was open in the stands in Mesa’s gym, as it was probably the hottest gym I have been in this year.

The game started as 6-foot-5 senior SG Jaron Hopkins (Univ. of Colorado signee) jumped out of the gym to win the tip for Dobson, but missed the first shot of the game, before Mesa 6-foot-4 sophomore PG Jalen Jenkins grabbed the rebound and blew by Hopkins for a basket and a foul.  Jenkins would miss the free-throw for a 2 to 0 Mesa lead.

Dobson 6-foot-4 junior SG Kodi Justice (Arizona State commit) then scored 4 points in a row, as he was being extremely aggressive early on, followed by an assist to a wide open 5-foot-9 senior guard Carson Glick for a three-pointer to go up 7 to 2 for Dobson.

Then Carson Glick again for another 3 on a nice pass from Justice, followed by a Hopkins' 3-ball for a 13 to 6 Dobson lead.  Dobson's early burst had the Mustangs' fans getting off their seats and cheering for their underdog team.

Mesa's 6-foot-10 junior center Isaac Allen then got fouled and converted both free-throws, followed by Jenkins, who got fouled as he blew by Hopkins again and made both, also for a 13 to 10 Dobson lead after the first quarter.

The second period started as 5-foot-10 senior guard Alex Brusnahan made a mid-range jumper for a 15-10 lead for Dobson.

Then the most spectacular play of the game took place where back-to-back blocks by Isaac Allen and Kodi Justice happened in the second quarter, seen here by Arizona’s Finest Mix-Tapes: Mesa Vs. Dobson Back to Back Blocks - YouTube

After those amazing plays, there were many missed free throws by both teams and some poor shooting.  Finally, Velazco would end the drought - making two free-throws for a tie at 15.

Justice then made two free-throws off a 1-and-1 for a 17-15 lead for Dobson.  Once again though, Jenkins would blow by his man again, followed by a deep three by 6-foot-1 sophomore SG Kale Abbott for a 20-17 lead for Mesa, which was the first three-pointer of the night by Mesa.

The score read 20-17 for a Mesa lead, after a brutal shooting display by both teams, but mainly Mesa.  Mesa was missing wide-open shots, but still held a 3-point lead, which was probably not good news for Dobson.

Jenkins had 10 points and Justice had 7 points at the half.

The second half started with an explosion of offense for both teams, as 5-foot-10 junior SG Christian Harris got hot and scored 8 points, along with Justice and Jenkins who scored 6 points each.  Also in that run, Hopkins scored 3 points and 6-foot-1 senior guard DJ Henderson scored 4 points for a 38 to 26 lead for Mesa.

Dobson 6-foot-5 junior SG Ryan Richardson finally got into the act and scored on a beautiful floater, followed by Jenkins two made free-throws for a 40-28 lead for Mesa.  Then Velazco made a tip-in for a 42 to 28 lead.

Dobson then played for the last shot and got that from Ryan Richardson, who hit a 3-point shot at the buzzer to close it to a 42-31 Mesa lead.

The final quarter started and Jenkins made a beautiful spin-move for a lay-up and a 44 to 33 lead, followed by Hopkins who goes coast-to-coast for a 44 to 35 game.  Then Jenkins scores again with a 10-foot shot for a 46 to 35 game.

Justice then hit a deep 3-ball and Isaac Allen got called for a technical foul.  Richardson made 1 free throw for a 46-39 game with 5 minutes left to play.

Henderson and Jenkins scored, followed by Hopkins for a 50 to 41 game.  But Hopkins would foul out of his last game in Arizona, as the Mustangs' faithful became very quiet.

Isaac Allen finally made his first field-goal of the night, as it was an emphatic dunk from a great feed by Harris.

The game finished with a free-throw display for DJ Henderson, as Mesa held on to win 68 to 54 - advancing to the Elite 8 where they will play the Desert Mountain Wolves at Arizona State's Wells Fargo Arena on Tuesday.

Jalen Jenkins was special tonight, as he had a game and career-high of 25 points.  He allowed only 9 points to star guard Hopkins, as they guarded each other the whole game.  Jenkins looked like the better prospect, versus one of the best guards in the state, which says a lot about Jenkins' future.

DJ Henderson scored 19 points, which was all in the second half, and Isaac Allen had 3 blocks and 17 rebounds to help Mesa on defense.  Felipe Velazco also chipped in with 12 rebounds.

Kodi Justice paced Dobson with 21 points in the losing effort.