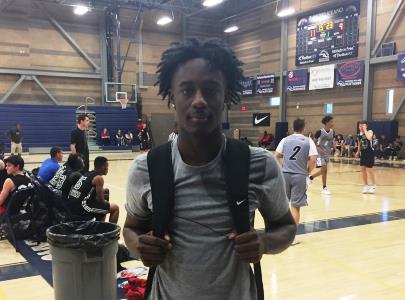 The Arizona Preps Spring Classic took place on Sunday @ Rancho Solano Prep Academy in North Scottsdale, and featured the state's top club programs and many of the state's top players.  With 16 different teams in action on the day, the scouts and media in attendance were able to catch some very good and lesser known college prospects.

While there were many top performers on the day, one prospect stood out from the rest, as Aspire Academy's 6-foot-3 sophomore guard Joel Brown impressed the scouts in attendance with his superb play.  For his efforts, Brown was selected as this year's Tournament Most Valuable Player.

A native of Canada where he played for the nationally recognized club program CIA Bounce (CAN), Brown is a young but tremendous talent that has a serious combination of skills and loads of potential for the future.  He is an electric guard prospect with a superb handle of the ball, and an ability to pass the basketball with prowess.  He pushes the ball up the floor and looks and finds the open man on the floor, while playing with a very unselfish style of play.

Brown was an integral part of the success by Aspire Prep Academy this season in their first year, and will be a major factor for the program the next two seasons as the program continues to build on their first-year success.  Look for Brown to become one of the most sought after recruiting targets in the West over the next year.

Congratulations to Brown on his performance in this weekend's event, and good luck to this young man in the future.