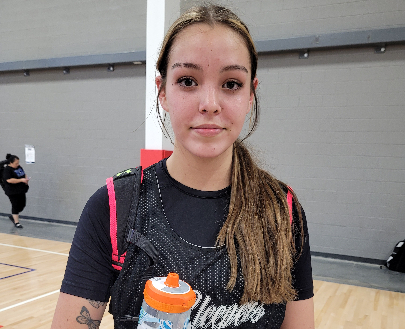 My scouting career has offered me multiple opportunities to evaluate some of the best players in the country, and even the world. I am pleased to have the opportunity to write for Arizona Preps, Nothin But Net Magazine, and Tribe Athletics. One of the best prospects that has emerged from my summer journey is 2023 6-foot-1 rising senior Kanani Coon. Coon hails from Kelowna, British Columbia and has a nice skill-set.

Coon can naturally play the shooting guard or small forward position, as she has reliable three-level scoring ability. While competing in Just4Hoopin’s Lori Piestewa Memorial Tournament, she put on an array of strong scoring performances by attacking opponents to finish at the rim. She also showed solid mid and long-range scoring ability. Ultimately, her teammate, 2023 prospect Ashiian Hunter, and Coon led their team (Dem Lady Sleepers) to a 17U Girls Championship at the Piestewa Tournament.

Besides scoring, Coon is a good defender who utilizes her length and cat-like reflexes to disrupt passing lanes and snag steals. She has a good IQ to turn those defensive plays into transition scoring opportunities.

Currently, Coon has offers from Southern Miss, Oakland, Portland, North Dakota, and strong interests from a few other schools. Her goal is to find a school on the West Coast, as she wants to play closer to home.

Coon would be a steal for a low-major program, however I believe she has mid-major plus potential.