A Letter From The Senior Editor, Anthony Ray 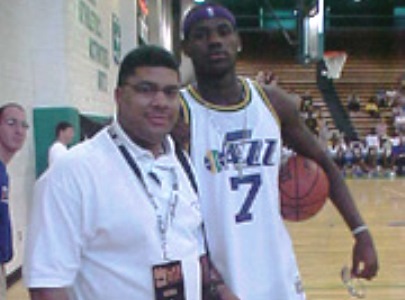 This tremendous development and success did not take place overnight. Instead, it took years to take place and the tremendous hard work and dedication by many to make it happen.

I took on this task solely in 1995, as an attempt to improve the Arizona basketball culture. At that time, the state was loaded with Division-I talent, but very few college programs really recruited the state. The state averaged 10 to 15 Diviision-I prospects per/year. In 2002, the state of Florida had more than (80) different Division-I signees - a huge disparacy between states, but also proving that Arizona had a long way to go to be considered a "hot-bed" for basketball talent. I knew we would somehow get there over time, since the state is so large and growing so fast, but it was very hard to see it or imagine it more than (20) years ago. For years, college coaches would consistently overlook our state's talent and top Arizona prospects would go under recruited or unnoticed all together.

Through the development and progression of top-rated club programs over time in the state, and their strong performances regionally and nationally, Arizona has improved consistently and grown significantly over the past (25) years. In fact, a state that seemed to be so far behind for so long in it's sheer approach to the game of basketball, will now finally offer a shot clock for high school varsity basketball games this season. The state is changing.

While we have talked consistently about how much the prep schools have impacted Arizona basketball and college recruiting over the recent years, this same impact was felt during the recent 2022 NBA Draft, as (5) of the (6) Arizona prospects that were drafted in the first and second rounds had each attended local prep schools in the valley. While Santa Clara's Jalen Williams attended (3) years of college before entering the draft, 5 of the 6 players that were drafted each starred for local prep schools here in the Valley - proving just how dominant AZ Compass Prep, Hillcrest Prep, Dream City Christian, PHH Prep and Bella Vista Prep have become in the state. The recent national success of AZ Compass Prep, as the program has reached new national heights, has also done wonders for the state, as the program was ranked as the #1 program in America. To see AZ Compass have a first rounder in Ty Ty Washington (Houston Rockets) and a second rounder with Jabari Walker (Portland Trailblazers), after having an NBA Lottery Pick in last year's NBA Draft (Josh Primo - San Anthonio Spurs) was very impressive.

What was even more exciting was that Dream City Christian Prep would post the #7 overall draft pick in the NBA Draft, as Shaedon Sharpe would go in the Lottery, after not playing one college basketball game - proving that his performance at a top-rated Arizona prep school would be enough to push him past highly regarded college athletes. Then Dream City Christian would follow that up with another tremendous selection, as MarJon Beauchamp's name would also get called in the first round by the Milwaukee Bucks - two amazing first round picks in the NBA Draft by one prep program. While Beauchamp did play for the NBA's G-League Team Ignite this past season, he built his profile by leading the Dream City Christian Prep program as a senior.

The COVID-pandemic was also tremendous in helping raise the level of basketball in Arizona. Over the first two years of the pandemic, the state of Arizona remained open consistently, which pushed many top tournament organizers and club programs to venture to the state for an opportunity to play basketball without many restrictions. As a result, many people enjoyed their visit and decided to relocate to the state, while many members of the national basketball community continue to set up shop or are considering a migration to the state over time.

When I decided that my life would become focused on Arizona basketball in the mid-1990's, I knew I could not take on such a task alone. While many credit me with building the Arizona basketball culture to what it is today, it has taken so many different people, coaches, players and entities to make such a task possible. We can all celebrate together in knowing that many Arizona student-athletes have and will continue to benefit from the new and improved Arizona basketball culture that has formed today. As a result of this culture, top prospects today will get recruited by college programs, but now also have an opportunity to play professionally as well - and not just overseas but in the NBA.

While this is a short write up regarding the basketball culture in Arizona, I will not go into the details of the many obstacles that I faced from many people, the amount of times I have had prominent people hang up the phone on me, the numerous times that people told me Arizona players were not good enough or too soft physically. I have championed Arizona prospects all of my life, as I played high school basketball here in the state, and have always tried to help our youth get a fair chance or shot at extending their playing careers. For so long, it seemed like I was on an island - working alone in this pursuit. But today, that has all changed forever, as I continue to marvel now at the amazing successes turned in annually by players and teams within the Arizona basketball culture.

Over time and at the pace that we are going, many new accomplishments will continue to arise for the state's basketball community. Some will be appreciated, while some will not be well received. Changes are never easy, but in our state they have been very much needed. While I watched the 2022 NBA Draft at home alone, it did not stop me from standing up off the couch and cheering as each Arizona prospect's name was called. It is a new day and we can never go back now.