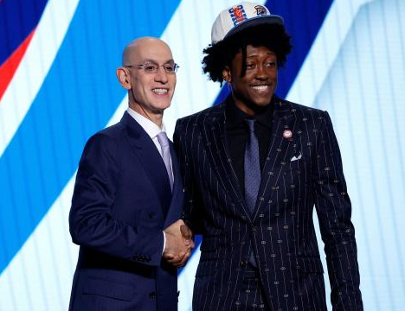 After many, many years of watching the annual and very exciting NBA Draft, and marveling at the many college prospects that get drafted each year - some whom we know, but most we do not. This year's NBA Draft though was much different, as (5) different Arizona prospects went in the first round of the draft. Three of the first rounders were naturally from the state of Arizona, and attended local high schools in the valley, while two more proved the strength of Arizona's prep basketball programs. A sixth Arizona prospect would go in the second round - giving the Arizona basketball culture (6) different drafted prospects on the evening.

It was almost surreal to actually see each of these Arizona prospects take the stage to meet NBA Commissioner Adam Silver on the stage, as they placed their new team hat on their heads - annointing themelves and indicating that each of their lives would now change forever. If you are in the Arizona basketball community, then you know some of these young men personally. If so, then the distance between an NBA player and those of you in Arizona basketball, became much smaller on Thursday evening.

Dream City Christian Prep super athletic Shaedon Sharpe would go first at #7 to the Portland Trailblazers. Sharpe left Dream City Prep early this season at semester to go to the University of Kantucky early, where he worked out for the second half of the season, before entering the 2022 NBA Draft. Sharpe was regarded as the best overall athlete in the draft, and was also the nation's top overall prospect in America's 2023 Class.

Perry High School graduate Jalen Williams (pictured) would go #12 in the draft to the Oklahoma City Thunder, in what was an amazing sight to behold. While Williams had played himself into this position with strong performances in the NBA Combine and in NBA workouts, but seeing him actually get drafted that high and it becoming a reality, was awesome and an outer-body experience. Williams had grown up before our eyes in Gilbert, Arizona, and had made all the right decisions in his playing career, including attending Santa Clara University and playing for Head Coach Herb Sendek, which has paid off dividends in his playing career.

Former Hillcrest Prep and Corona Del Sol HS product Dalen Terry would surprise the basketball world when he would get selected as the #18 overall pick by the Chicago Bulls. Terry also played his way into the first round and into this year's draft overall, as a result of his strong workouts and his amazing personality and charisma. Thursday evening was a big accomplishment for Terry, as he hosted an amazing draft party in the valley with friends and family, and celebrated the announcement of his selection.

Former AZ Compass Prep and Cesar Chavez HS product Ty Ty Washington would be selected as the #29 overall pick by the Memphis Grizzlies in the first round. Washington overcame many obstacles in his life to get to where he is now - making it so much sweeter as his name was called just before the end to the first round, as he found his home just before the music stopped - proving that the night was totally in Arizona's favor. Washington attended the University of Kentucky for one year, before entering this year's NBA Draft, and now all the years of hard work and dedication to his craft has all been worth it.

In what was one of the most amazing stories of this year's NBA Draft, Dream City Christian Prep's MarJon Beauchamp would also be selected in the first round, as he would go #24 to the Milwaukee Bucks. Beauchamp had been down a very long road to achieve his dreams, and also had many obstacles in his life to overcome to position himself for this dream. Beauchamp cried a great deal after hearing his name called and I cried with him, as I was so proud of what he has accomplished.

Not to be denied, AZ Compass Prep product Jabari Walker, a sophomore from the University of Colorado, would hear his name called just before the end to the draft, as the Portland Trailblazers would select him withe the #57 overall pick in the second round.

The selection of Walker would bring me to my feet, as the end of the night concluded with (6) different Arizona prospects getting drafted, in a draft that has not ever been so kind to Arizona prospects in the past - proving that Arizona basketball is not only on the rise anymore, but we have arrived!