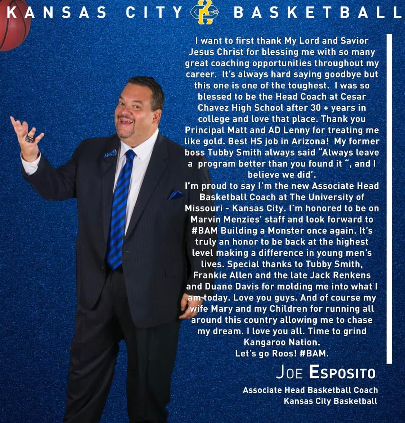 It was just a matter of time for greener pastures to open up for former Cesar Chavez High School Head Coach Joe Esposito. After taking over the helm at Chavez, after the school decided not to renew former Head Coach Gary Lee's contract, it seemed to be just a matter of time for Esposito to return to his roots in Division-I basketball. Esposito was hired as only the second Head Coach to lead the Chavez program in the school's young history.

Recently, after the hiring of longtime successful Head Coach Marv Mensy at the University of Missouri-Kansas City, Mensy announced that he had hired Esposito as an assistant coach on his new staff. Esposito had previously worked as a Special Assistant to Mensy at UNLV.

Esposito's amazing wealth of college coaching experience also includes being an assistant coach at Memphis and Texas Tech, Director of Basketball Operations at the University of Minnesota and Head Coach at Angelo State.

Last season after taking over the Cesar Chavez High School basketball program, Esposito led a young team to a very successful season - finishing with a 17-10 overall record and a 9-1 record in Region play. It is still unclear as to who will now take over the basketball program at Cesar Chavez, but congratulations and good luck to Coach Esposito in his future at UMKC.