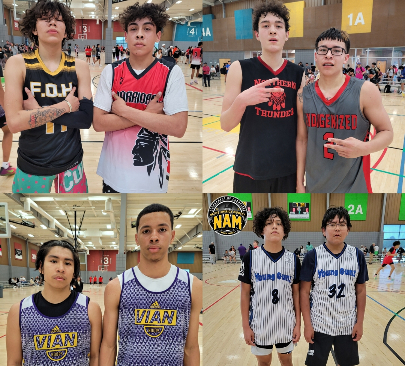 Excitement is brewing in the building as pool play is wrapping up and the launch of the Lindy Waters III Camp. This event has been a treat as the Midwest has been represented well. Besides hardware on the line, Tribe Athletics has brought in the top scouts and evaluators to assist with the Individual Power Rankings. The rankings will provide a greater platform for college recruitment for Indigenous Student Athletes. Not all Native Basketball Tournaments are created equal, Tribe Athletics is the only Indigenous Hoops Series that provides maximum exposure from NCAA Scouting Services, National Media Coverage and College Coaches.

A Haskell Indian Nations University commit. A nice forward prospect that can play both the wing and inside. He has a smooth stroke, good bounce and finishing ability. An underrated rebounder who is a solid playmaker on both ends of the floor with tremendous upside.

A United Tribes Technical College commit with the ceiling to be a nice low-major plus prospect. A bouncy guard with a nice skill-set. He thrives in his ability to leak out in transition and loves to attack the rim. An impressive prospect with a ton of upside.

A nice forward prospect who plays both the small forward and power forward positions. He cleans the glass on both ends of the floor, runs the floor well with good touch and passing ability. He will be a nice pickup for a small college.

An impressive scoring machine who displayed an array of scoring ability from all three levels. He has a unique ability to slice and dice through opposing defenses. A nice sleeper prospect with tremendous upside. His best years of basketball are ahead of him.

A double-double machine, as he had a phenomenal showing at the NAM Tournament of Champions. His stat line is sneaky, as he quietly will hurt opposing teams with his clean-up ability on offense and superior glass cleaning ability. Another nice sleeper prospect who continues to get better every game.

An athletic downhill guard prospect who thrives in slashing to the basket. He has a nice mid-range with a great frame and platform to be a nice college prospect. I enjoyed watching him defend all 94 feet and wrecking havoc for his opponents.

An offensive architect with great court awareness. He possesses an elite three-level scoring ability who thrives in transition. He is a crafty defender with great anticipation to disrupt passing lanes. He has a high ceiling, as he has a great feel and IQ for the game. His stock should continue to rise because of his elite scoring ability.

A big time Division-I prospect who went for 50 points, 16 rebounds, 11 assists and 4 blocks in one game. He is a crafty scoring guard with an elite three-level scoring arsenal. His most impressive attribute is his poise, as he knows how to change his rhythm to have high quality possessions and scoring selection. Eaglestaff is sneaky athletic and changes the atmosphere of a game. I have him as the top prospect in this event. He recently committed to the University of North Dakota and was named Mr. Basketball in his home state of North Dakota. Although he signed at a low-major, I think he has the skills and ability to compete at a mid-major plus. UND got a steal in signing Eaglestaff.

A hidden gem prospect who impacts the game with his inside presence. He has nimble footwork, which allows him to be crafty when attacking his opponents in the low post. I like his finishing ability, soft-touch and mid-range, which can devastate opposing defenders. He cleans the glass and uses his body extremely well. He will be a nice pickup for a small college, unless he can grow another three inches.

A nice low-major prospect with a great ceiling. He is a three-level scorer who makes plays on both ends of the court. I would like to see him add to his vertical, as increasing his vert could see his stock reach new heights.

A solid sleeper prospect at a low-major level. He has a great ceiling, as he has a solid skill-set on both ends of the floor. His IQ and natural feel for the game gives him the opportunities to fill up a stat sheet. College coaches keep a tab on this young man, as he has a bright future ahead of him.

Another big time prospect with huge upside on both ends of the floor. Ironshell is an impact player with his solid three-level scoring ability. He plays with a chip on his shoulder, which earns him opportunities to make big plays that change the climate of the game. I would like to see him improve his poise, which will come with maturity. I am excited to monitor his growth.