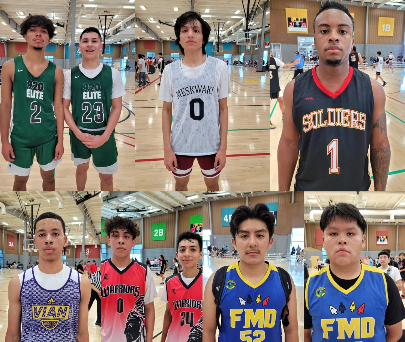 Tribe Athletics does it again in bringing the top Indigenous talent in North America to compete in their Native American Midwest Tournament of Champions. This event is refreshing to cover as there was a nice collection of prospects from numerous states. Here were some of the top performers from Day 1 of this year's event . . .

A nice guard prospect with a smooth rhythm and skill-set. A southpaw guard with a smooth stroke. His play reminds me of current Phoenix Sun's guard Cameron Payne. He has a quick release and is a three-level scorer with an IQ to get his teammates involved. This kid would be a fantastic pickup for a small college looking for a smooth guard who can change the atmosphere of a game.

A hidden gem point guard prospect with supreme athleticism. He is a downhill point guard who facilitates well with nice finishing ability and range. Looks can be deceiving as he showed incredible leaping ability. This young man will be a nice small college prospect with a nice ceiling to grow.

A clever guard with soft touch and three-level scoring ability. He has a great IQ and decision making ability, as he is the key player in kick-starting his team’s offensive rhythm. My favorite ability that he possesses is his ability to break down his opponents into a scoring opportunity for himself or finding an open teammate.

A spark plug prospect who can ignite an array of offensive attacks. He is a gritty defender, which helps create transition opportunities. He will dive and hustle for 50/50 balls. I am a big fan of his play, as he reminds me of a younger version of New Orleans Pelican guard Jose Alvarado.

A nice prospect with a lot of upside. He has the physical tools to be a nice college prospect, as he has good size and wingspan. College coaches keep a tab as he passes the eye test. I would like to see him develop his ball handling and perimeter shooting, overall another hidden gem prospect.

A scrappy slashing guard prospect with a good motor on both ends of the floor. He can hurt opposing teams with his knack for lighting up the scoreboard. His defense creates a lot of transitional offensive opportunities. This kid is tough as nails and can go.

An elite three-level scorer who utilizes his body well to get the baskets he desires. He has a high IQ, great decision making and anticipation. An impact player whose play speaks loudly on both ends of the floor. With improvement to his athleticism, he has a high ceiling to be a nice NAIA prospect with a high ceiling to play at a higher level.

Probably the most improved player that I had the pleasure to follow. I have been watching him compete since his elementary days, and he has emerged as a nice point guard prospect. His game has really grown on me, as he is an excellent facilitating point guard with a unique ability to score at all three levels. He has a great IQ and feel for the game with a knack for disrupting passing lanes to create transition offensive opportunities.

A nice college prospect with a nice offensive skill-set. He has NBA range and a clever offensive architect with great scoring ability. He rebounds well for his size and defends all five positions. He currently has a few college offers from schools such as St. Katherine and Friends University. I anticipate his college recruitment to heat up into late Spring.

A traditional big man with elite footwork and back to basket post scoring ability. He can guard bigger posts and knows how to use his frame to win battles in the paint. He cleans the glass well and is a great find for a smaller college needing a polished big man.

A nice combo-guard with a great frame and athletic ability. He is a three level scorer who is willing to carry his team on both ends of the floor. A nice small college guard with tremendous upside.

Overall, there were a lot of nice prospects as the Tribe Athletics Exposure Series draws the top Indigenous talent from around North America. I look forward to seeing more of the top prospects emerge, as the prospects are playing for more than hardware as Tribe Athletics is working on unveiling their Individual Power Rankings.