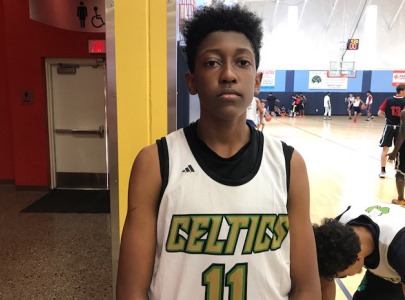 One of the better guard prospects in Arizona's 2019 class of prospects is Perry High School's 6-foot-1 sophomore guard Jalen Williams.  Williams is a nice guard prospect with a high skill level and tremendous upside for the future.  He is coming off a good showing as a sophomore and looks to be on the rise in the class.

Arizona's 2019 class of prospects is very talented in the state, filled with many talented performers for the future.  Williams is one guard prospect that has the potential to play at the division-I college level, and he has shown serious promise as of late in several events this spring.

I was able to watch Williams perform this spring and was very impressed with this young man's ability to make plays for himself and others off the dribble.  He has an excellent ability to create off the dribble and finish plays with a slick handle of the ball.  He has very good body control and is able to slash between defenders to get into the lane.  Williams also has an excellent shooting stroke with unlimited range on his shot, which keeps defenses honest from anywhere on the floor and sets up his drives to the basket and his mid-range game.  He has a very quick release on his shot also which allows him to get his shot off.

Williams has a long, lengthy and rangy body with huge feet, which suggests that he is still growing a great deal.  Williams has extreme upside as a player, which suggests that he will only continue to grow a great deal and could get to be 6-5 in height when it is all said and done, which would intensify his college recruitment immensely.  The amount of upside possessed by Williams is glaring and makes him a very intriguing prospect to me.

As a sophomore, Williams emerged as one of the better young guards in the state, and I look for him to only continue to improve a great deal over the next year.  While he is a nice looking prospect now, in a year this young man could see a dramatic rise in our 2019 Class player rankings.