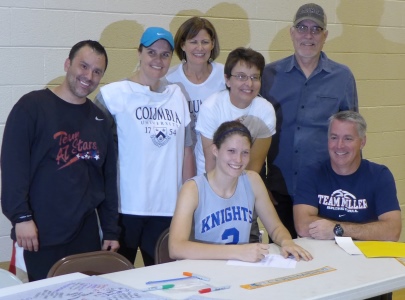 The Fall NCAA Signing Period began on Wednesday across the country, and Arizona's top-rated 2014 girl's prospects took part in the activities.  Many of the state's top girls prospects would sign national letters of intent on the day, and receive praises from their families, fans and overall supporters in a joyous occasion.

Leading the way on the day was top-rated girls prospect, Tempe Prep High Schools talented 6-foot-1 senior guard/forward Camille Zimmerman.  Zimmerman would sign her "Likely Letter" on Wednesday with Columbia University, a member of the famous Ivy League and one of the top academic programs in the country.

"Today we held a small celebration at the gym after practice for Camille, and all of the people who helped her get to Columbia University," said Camille's mother, Maureen Zimmerman.  "Though you were not there, we mentioned you (Anthony Ray) and want to reiterate that we APPRECIATE your confidence in Camille."
Zimmerman recently turned in a runner-up Tournament Most Valuable Player performance in this year's Arizona Preps Fall Showcase event, proving her #3 overall ranking among Arizona’s top 2014 prospects, while also making a strong case to be ranked even higher.

Zimmerman is among the most uniquely talented prospects in the state – possessing excellent size and a unique skillset that allows her to play inside and out.  She has very good toughness as a player and is a competitor that loves the game of basketball.  She is only scratching the surface of just how good she can become, and I look forward to her continuing to develop a great deal over time and becoming one of the better college players in the country in the Ivy League Conference over time.

Congratulations to each of these young women on their impressive accomplishments from our staff here at Arizona Preps.