Zeke Thompkins Coming Into His Own 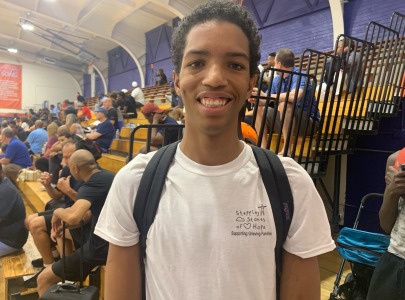 One of the state's top overall prospects in Arizona's 2020 Class is now coming into his own, and is a nice sleeper prospect for college programs to take a hard look at this fall. Apollo High School's gifted 6-foot-6 senior guard Zeke Thompkins is a very skilled, much bigger guard prospect with an excellent feel for the game. Possessing excellent basketball bloodlines, Thompkins is a sure-fire guard prospect that is set to have a big senior season for himself - the most important season of his young career.

Thompkins is the son of former Arizona Preps' staff member and good friend Gary Thompkins, who passed away in 2016. Gary was regarded as one of the top basketball coaches in the state before his death, and also was a terrific player that played professionally and also starred at Iowa State. His older brother Sammy Thompkins was one of the state's top performers in Arizona basketball history, and played for Boston College before changing schools recently.

As a member of such a successful basketball-focused family, Zeke has had to come into his own and create his own identity as a player, especially in the absence of his amazing father, who did so much for so many members of the Arizona basketball community in the state of Arizona. While his father was a big-time scorer of the basketball as a player, and his brother (Sammy) was both a playmaker and a scorer, Zeke has gravitated more to being a pure playmaker - a rare find for a guard prospect with so much size for the guard position.

A left hander, Zeke is a pure, pass-first point guard that enjoys having the basketball in his hands and making plays off the dribble. He is a creator and can create scoring opportunities for himself, as needed, but he enjoys getting his teammates off much more at this stage in his playing career. Zeke is a valuable asset for any team he plays for as a result of his unselfish approach to the game. He is a strong handler of the basketball and sees the floor very well, while looking to push the basketball up the floor to the open man.

Thompkins is also a good scorer of the basketball when he decides to be aggressive offensively. In fact, Zeke grew up as a strong scorer of the baskeball, but adjusted his game over time into more of a floor general, so the scorer's mentality is still there, and it should develop much more over time as he continues to mature physically. He can almost scorer when he wants to, and possesses the handle to get into the lane and finish, and also make shots with regularity and range on his shot, a nice aspect of his game.

Thompkins and his Apollo teammates are coming off a very strong season last year, when they posted a 25-4 overall record on the season. They would reach the 5A Semi-Finals, before falling at the hands of eventual 5A State Champion runner-up Millennium HS (72-61). While Apollo lost star wing Emmanuel Taban (Cal-State Fullerton) to graduation this off-season, Thompkins will return to team up with 6-foot-5 junior guard Paris Woods to give the Hawks one of the state's elite and tallest and longest backcourts in the West this season.

Veteran and very successful Apollo Head Coach Jacob Marin will have his team ready for another 5A state title run this season, and the Hawks will be very tough to beat again in the 5A Division. Thompkins will be a major key to the success of this year's team and hopes for another state title, and I expect Zeke to raise his level of play a great deal in his final high school season.

Zeke Thompkins has always been regarded among the top overall prospects in the class, and, while other prospects in the class have received much more attention from college coaches to date, Thompkins is one prospect that should raise eyebrows throughout his senior season - raising his overall level of recruitment in position for a spring signing.

Zeke will be playing this season with a heavy heart, as he will focus again on leading his team to a state title in his final season, and also looking to make his successful basketball family proud - his immediate and extended family. So many in the Arizona basketball community are pulling for Thompkins this season to have a big year, and myself and our Arizona Preps' staff are at the top of the list.

Arizona Hoop Review Scouting Report: Thompkins is a long, lengthy guard prospect that enjoys playing the point guard position, and is a true point guard with excellent size that can see the floor a great deal and look over the defense. He enjoys making plays off the dribble in the lane or surveying the floor and getting the basketball to the open man. He is a strong handler of the basketball and and can get to where he wants on the floor, while also looking to push the basketball up the floor every chance he gets. Thompkins is a very good shooter of the basketball as well, and has nice range on his shot with a nice left-handed shooting stroke. I would like to see him develop his mid-range game this season in preparation for his future career, and also post up smaller guards more. A good rebounder from the guard position, as a result of his sheer size. A good defender with quick hands and feet for his size. A very good overall guard prospect that has an excellent feel for the game, and also has tremendous upside for the future as player.