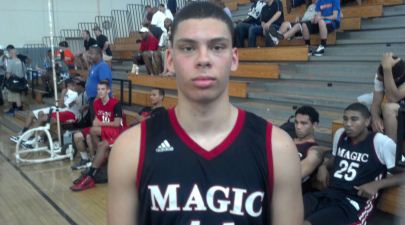 Arizona's 2014 class of prospects is as loaded a class as there is among states in the West, and while many prospects in the class have already emerged at a high level amongst college coaches, scouts and media, there are still numerous players within the state that have gone well below the recruiting radar.

One player that has soared well below the radar is Tucson Amphitheater's 5-foot-10 junior point guard prospect Yusuf Shehata - and for good reason.  Shehata was a contributor last season on Amphitheater's state championship runner-up team - a team that finished with an impressive 30-4 overall record last season.  Shehata was best known last season for catching the basketball late in the state championship game with seconds remaining in regulation, and then passing up a final shot for his team - electing to pass the basketball to a teammate rather than shoot the basketball for the game winner, as the game's buzzer sounded.

This past spring and summer, we saw a much different guard in Shehata as he took control of games offensively for his high school team, and then carried that confidence over to the club circuit while competing his his club team, the Arizona Magic Elite 16U.

While the strong play of Shehata still went unnoticed throughout the spring and summer, he got what he deserved last weekend while participating with his club team in Los Angeles, CA.  Competing in an invite-only 16-team event, the Fullcourt Press Fall Hoops Classic, Shehata took his game to another level as his team defeated a talented Belmont Shore team in the event.  Shehata would explode for 30 points in the win, and in front of numerous college scouts and media in attendance.

Elite basketball scout Frank Burlison (Long Beach Press Telegram) would approach Shehata after the game, impressed with his performance, while Joel Francisco (ESPN) would write the following regarding Shehata's performance:

"Arizona Magic has a definite sleeper in 5-10 junior Yusuf Shehata (Tucson, Ariz./Amphitheater).  The strong point guard prospect has solid quickness, defends and he can bury the 3-point shot on a consistent basis."

Shehata has now emerged as one of the top guard prospects in Arizona's 2014 class - going from an unknown prospect in Arizona to a serious college prospect on the West Coast.  This is how it is done.  Work hard and when your opportunity arises, take advantage of it.  Shehata has done that.

This young man now looks ready to lead his Amphitheater HS team to another strong high school season, and will look to build on his recent success as a player.  While it is still unclear as to what level of college basketball Shehata will eventually land at, he now has given himself some options for the future - options he did not have before last weekend's tournament in LA.

Arizona Hoop Review Scouting Report:  Shehata is a strong, well-built and true point guard prospect with an excellent handle of the basketball and a nice shooting stroke with range on hsi shot.  A left-hander, Shehata gets good lift on his shot and has a quick release, which he shoots with very good prowess.  Capable of shooting from the standstill position on the floor or on the move, Shehata is a heady point man that looks to get the basketball to the open player on the floor, but also can make defenses pay with his ability to shoot the basketball or penetrate and finish.  He is a good finisher that can score with floaters over bigger defenders in the lane, and is also capable of taking the ball strong to the basket and finishing as well.  He is a good passer that has good court vision, but, at times, can get careless with the basketball.  Advances the basketball up the floor and gets the ball to the open man.  A very good defender that has excellent lateral quickness and sits low defensively - capable of becoming a lock-down defender.  A solid guard prospect with a nice frame for his smaller size.  A very nice young man that is very soft-spoken.