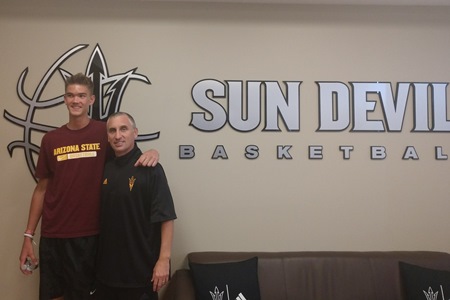 There is another top-rated middle school phenom coming up the basketball ranks, and like other past elite middle school prospects, 6-foot-9 8th grader Dylan Anderson is generating and serious buzz as of late, which is now resulting in a big PAC-12 offer very early in the recruiting process.  With one offer already under his belt, Anderson has now received a scholarship offer from head coach Bobby Hurley and the Arizona State Sun Devils.

Hurley and his staff are making it widely known that they are on board to recruit and eventually land Anderson, one of the elite middle school prospects in America.  Hurley also stepped up very early in the recruiting process of former middle school phenom Nico Mannion - offering Mannion before his freshman season at Pinnacle High School.  For Anderson though, he has just entered his 8th grade school year, receiving an ASU offer a year earlier than Mannion.

It is not uncommon for such top-rated middle school prospects to receive such big offers from PAC-12 level programs.  Duke's Marvin Bagley received an offer at the same time from the University of Arizona, and so did former Highland HS graduate Matt Carlino.  NBA guard Jerryd Bayless (Philadelphia 76ers) did not receive a PAC-12 offer until the end of his freshman season at St. Mary's HS, so things are changing as social media and the internet is now a much bigger factor in the college recruitment of nationally ranked middle school prospects, as young kid's exposure to college coaches is taking shape much earlier.

Anderson is the next big thing in the state.  A mere 2022 college prospect, Anderson is already an amazing 6-foot-9 in height and has very good athleticism, versatility and mobility on the floor.  He is very fluid in his approach to the game, and is very advanced in his approach.  It will be very interesting to see just how much he continues to grow in height, since he is so tall early, but, whether he ever grows even another inch, Anderson is already excellent size and length and has a high-major skill level already.

Northern Arizona head coach Jack Murphy was the first school to extend an offer to Anderson, so he now has two offers for himself on the table.  Look for many, many more college programs to follow ASU and NAU with offers soon, as they learn about this young prospect.  The recruitment of one of the nation's next elite young prospects has now began.