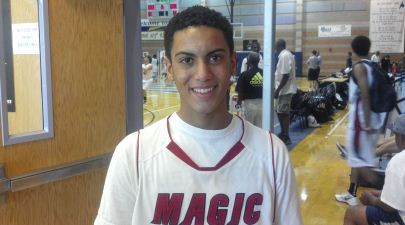 With all of the focus this summer being on the 2013 rising senior class, and even the 2014 rising junior class in the state of Arizona by college coaches across America, no one went into the summer months expecting to evaluate or even witness the superb talents of a rising 8th grader - a member of the 2017 class.  While it wasn't expected, it happened.

Arizona College Prep 8th grade prospect, 5-foot-9 point guard Markus Howard emerged this summer, even though no college coaches expected him to, while competing at the 16U level for the Arizona Magic Pump N Run-2014 squad.  While competing with the team in the Adidas Three Stripes event in California, and then the Adidas Super 64 event in Las Vegas, the very young Howard showcased his superb young talents in front of numerous college coaches - putting up double-figure numbers in scoring in almost every game he participated in both events.

Howard's play was strong enough to have college coaches in attendance turning the pages of their coaches packets, while in disbelief after learning that he was not even a high school prospect at the time.

"He is only going into the eighth grade?" - one college coach asked me after watching the young Howard's performance against much older competition.

While Howard primarily has competed against players his own age throughout the off-season, this summer, Howard raised his level of play a great deal - competing at the 16U level with his older brother, 2014 class prospect Jordan Howard.  Jordan Howard, a 5-foot-10 rising junior point guard for Perry HS, reeled in several scholarship offers for himself with his play this summer and is one of the state's top prospects in the 2014 class.

Markus Howard, the youngest of three Howard brothers, looks to be the strongest of all and a big-time future talent in the state.  In fact, I have not seen a player as skilled as Howard at such an early age, since Jerryd Bayless (Memphis Grizzlies-NBA) graced the Arizona hardwood.  While not as imposing an athletic talent as Bayless yet, Howard is more skilled at the same point in his young career.

Howard plays the game with extreme confidence everytime he steps onto the floor, and has the belief that he is the best player on the floor at all times - regardless of the age of competition.  He has the "It Factor," and he has very fun to watch play.

The future looks to be extremely bright for Howard who will not enter high school until the 2013-2014 high school season, and, with so much success this early, it will be very interesting to see just how much he continues to progress as a player.  Judging by his extreme talent already, the sky looks to be the limit.

Howard is a product of a strong basketball family.  We spoke about his older brother Jordan Howard, while his oldest brother, Desmond Howard, has moved on to play collegiately at Phoenix College.  His father Chuck Howard is a basketball trainer and also the Strength and Conditioning coach for the Grand Canyon University basketball program, while also operating Grand Canyon’s Recreation Centerbeing.  His mother, Noemi Howard, also works at the school – managing the school’s Rex Center.

I will be keeping a close eye on Markus Howard for the future, as he has already made a case for himself as being one of the state's elite-level young talents.