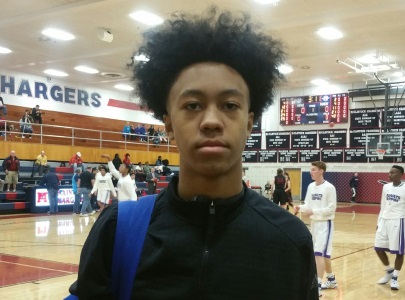 Talented 6-foot-5 sophomore prospect Xavier Dusell is an elite young prospect in the state, and has found a new high school home for himself.  After spending his freshman season at Mesquite High School, Dusell has now landed at Chaparral HS, where he will now play his sophomore season for head coach Dan Peterson this season.

Arizona's 2020 class of prospects is loaded with some top-rated national talent, and Dusell is one prospect in the class that also deserves serious regional and national recognition, although he has yet to see his college recruitment take off like that of some other members of the class.

Currently, Dusell has an offer from the University of Montana, and should begin to start generating much more recruiting interest for himself this high school season.

Dusell traveled on the club circuit this past spring and summer with Team Harden, a heavily Adidas-sponsored program in the state organized by NBA star James Harden.  Dusell missed much of the summer with an injury, so he will look to regain his form this high school season.

Dusell averaged 14.8 points, 3.3 rebounds and 2 assists per/game in his freshman season at Mesquite HS - big numbers for a freshman prospect at the 5A varsity level.

Much like fellow 2020 class members Niko Mannion (Pinnacle HS) and Jason Harris (Desert Ridge HS), who have already received major national recognition, Dusell is in the same mode - a national level prospect with loads of high-major potential for the future.

I look forward to following Dusell this high school season, as he picks up his game and career at Chaparral, and will bring you any updates as they continue to develop regarding his college recruitment.

Arizona Hoop Review Scouting Report:  Dusell is a special young talent - possessing excellent size and versatility as a player.  Dusell is capable of playing several perimeter positions on the floor, while having a strong handle of the basketball and a nice perimeter shooting stroke with range.  He is able to make plays for himself or others off the dribble, and is a sure mis-match for opposing defenders - able to score inside and out.  As he continues to mature physically, I look for Dusell to be able to post up more, which will make it even more difficult for smaller defenders to guard him.  Currently, he likes to score from the perimeter, where he is much more comfortable at this stage in his young career.  He is a good passer with a nice overall feel for the game.  He is a good rebounder.  A solid defender.  Has a very bright future ahead of him.