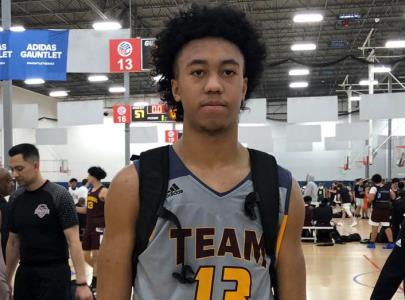 AZ Compass Prep 6-foot-4 sharp-shooting senior guard Xavier DuSell has made his college decision, after announcing his decision for college on Sunday. Dusell is coming off a strong performance throughout the spring and summer, where he turned in numerous strong performances with his Team Harden club program.

After recently making his decision to return to Compass Prep for his senior season amidst loads of division-I talent on the roster, after mulling over his options for college, DuSell has decided to give a verbal commitment to the University of Northern Colorado and Head Coach Jeff Linder and his staff.

DuSell made his decision for Northern Colorado over offers a list of good offers from New Mexico, UTEP, Wisconsin-Milwaukee, Montana, Idaho State and Northern Arizona.

DuSell's decision for Northern Colorado is a good get for Linder and his staff, as DuSell is one of the best pure shooters and scorers of the basketball in Arizona's 2020 Class.

While traveling with his club program the past few spring and summers, Team Harden, on the top Adidas Gauntlet Gold Circuit, DuSell gained notoriety and attention for his ability to make shots from anywhere on the floor, with excellent range and a quick release.  He has good size and is also capable of playing several positions on the floor.

DuSell decided to transfer to the AZ Compass Prep program in the fall of 2018 - leaving Chaparral High School after one season at the school.  DuSell also spent his freshman season at Mesquite HS, before making the move to Chaparral.  DuSell is coming off a strong junior season for AZ Compass, where he was a consistent top performer for the program.

DuSell will team up with such top-rated talents as Frankie Collins and Maxwell Lewis this high school season to give AZ Compass Prep one of the more talented prep lineups in the West.

Congratulations to DuSell on this commitment and his decision for his college future. Also congratulations to the AZ Compass Prep staff and the Team Harden organization from our staff here at Arizona Preps.

Arizona Hoop Review Scouting Report:  DuSell is a special talent - possessing excellent size and versatility as a player.  DuSell is capable of playing several perimeter positions on the floor, while having a strong handle of the basketball and a nice perimeter shooting stroke with unlimited range and a quick release.  He is difficult to defend as a result of his shooting prowess, which he is able to get off almost at will.  He is also able to make plays for himself or others off the dribble, and has a good overall feel for the game.  I would like to see him be able to post up more, which will make it even more difficult for smaller defenders to guard him.  Currently, he likes to score from the perimeter, where he is much more comfortable at this stage in his young career.  He is a good passer with a nice overall feel for the game, and has very good versatility as a player.  A good ball handler.  He is a good rebounder and finisher in the lane.  A solid defender.  Has a very bright future ahead of him, as he can be a specialist also.  One of the best shooters of the basketball in the West, and one of the top overall sleeper prospects in the West as well.