Xavier Advances To Second Round With Home Victory Over Tucson 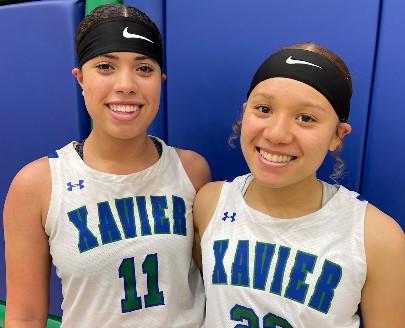 Tuesday evening around the state much of the state's girl's high school varsity teams were in action, as each of the Big School Divisions (3A through 6A) began their state playoffs. Arizona Preps was in attendance to watch #3 seed Xavier Prep take on #14 seed Tucson High School. Xavier Prep (12-3) is absolutely loaded with top-notch young prospects for the future, and will become a dominant force in the state over time. Xavier Prep and terrific Head Coach Jennifer Gillom would look to begin their quest for a 6A State Championship in 2021 on Tuesday evening.

Xavier would take a 25-13 lead into halftime.

In the third period, Xavier would blow things open - outscoring Tucson 18 to 12, and taking a 43-25 lead into the fourth period.

The three quarter 18-point advantage would be too much for Tucson to overcome, as Xavier Prep would then cruise to a 56-42 first-round playoff victory. Xavier will now advance to face #6 seed Mesa High School, who defeated #11 seed Pinnacle 69-63 in the first round Tuesday evening.

Xavier Prep will become a program that receives major national attention over time, but they are looking to make a strong case for the future this high school season, with a strong showing in the 2021 AIA State Playoffs.

Here are some evaluations of the top prospects I observed from this contest . . .

Mia Davis 6-1 SOPH Xavier Prep - Davis is a superb talent and among the top overall prospects in America's 2023 Class. She will soon become a household name among basketball enthusiasts nationally. A bigger and very skilled wing prospect with excellent size and strength, and an ability to make plays for herself and her teammates. An excellent shooter with unlimited range on her shot, a strong handle of the basketball and ability to see the floor and make plays with the basketball to create scoring opportunities for her teammates. A big time national prospect.

Sarah Miller 5-10 FR Xavier Prep - Another superb young prospect with a high skill level that suggests that she will develop into one of the top 2024 prospects in the country over time. A very good shooter that operates at a high level from mid-range, and is able to make plays for herself and her teammates in the paint. She is a creator with the basketball in her hands, and has a strong handle of the basketball with a good overall feel for the game.

Victoria Saucedo 5-7 SR Xavier Prep - An excellent shooter with unlimited range and a pure shooting stroke. Has excellent form on her shot - a specialist. Moves without the basketball and gets open. Has a quick release also. An active defender and rebounder. Good ball handler and passer - fundamentally sound.

Sienna Cherwinski 5-7 SOPH Xavier Prep - A skilled point guard prospect with a strong handle and leadership qualities. A floor general. Fundamentally sound. Sees the floor and makes players around her better. Has a nice shooting stroke and can get into the lane and finish. Pushes the basketball. Good defender with a high level of competitiveness. A nice looking young, guard prospect.

Dominique Nesland 5-8 FR Xavier Prep - Another very gifted young prospect that will develop nicely over time. Has a very strong physical frame and a good overall skill level. A good ball handler and passer that sees the floor. A very good shooter with range, and can create off the dribble. A strong rebounder. Has excellent potential for the future.

Tamia Clardy 5-4 JR Tucson HS - A skilled ball handler and passer that pushes the ball up the floor. A good shooter with range and an ability to create and makes plays off the dribble in the lane. A solid finisher. A good defender with quick hands and feet. Has very good potential.

Calista McLean 6-2 SR Tucson HS - A bigger post prospect with excellent size and strength. Still raw offensively, but she runs the floor and competes. Did not play much in the contest, but she has some physical tools that suggest that she can develop over time. A strong rebounder. Capable shotblocker. Has some upside.