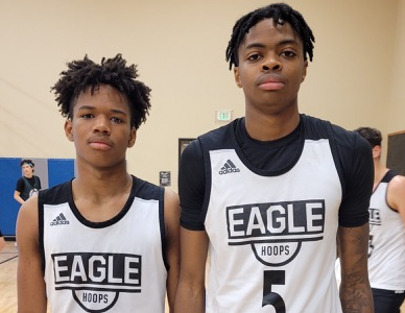 This event was well run and a lot of fun to cover, since there are a lot of new teams and talent to scout. The best part of this event is the staff at LFPA are providing a free YouTube stream for spectators and college coaches to tune into. We are pleased to bring coverage, as this event is loaded with sleeper and stockriser prospects.

Here are some of the top performers from Day 3 of the Wolves Classic . . .

Thomas is one of my favorite point guards in the 2024 class, as I anticipate his stock to rise into the Fall. He is a solid mid-major prospect who plays with good energy. He is a three level scorer that can hurt opposing guards in a variety of ways. Thomas makes plays and sets his teammates up to score and is a good on-ball defender.

Gupton is a solid mid-major hidden gem who has great length and athleticism. He is receiving  a lot of college interest and I am confident his recruiting will catch fire heading into the Fall. His athleticism and length make him a matchup nightmare for opposing wings. Besides his ability to slash and finish, he displayed good range, which can make him a matchup nightmare for defenders, as he is an inside and outside scoring threat.

Olson is a playmaker who knows how to strike the iron when it’s hot. A pure shooter with great IQ and tight handles. He hit some big shots to change the climate of the game. He has a great ceiling and is a solid low major prospect.

This young man is a solid mid major talent who has sneaky athleticism, bounce, and guard skills. He is a good shot blocker and has a good motor on both ends. Lightfoot had the play of the day in throwing it down in traffic. I project this young man’s recruiting to heat up.

Rojas is a potent scorer from all three levels, great vision and anticipation. He is a scorer that knows how to strike the iron when it’s hot and thrives in transition. He defends well with active feet and hands as he had a plotherea of steals, which he utilized to create scoring opportunities. He will be a fantastic small college pickup.

Yazzie is one of the smoothest and fluid point guards in the gym. He has a nice handle and is sneaky quick to get steals and drive past defenders. He controls the offensive and defensive tempo. He is another solid small college prospect as he is a fantastic floor general.

Begay is a nice small college sleeper prospect as he has a great feel for the game. He rebounds well for his size and has good scoring ability from the inside and mid-range. Begay impressed with his skillset as he was a fierce competitor.

Coates is a nice forward/center prospect as he cleans the glass well and protects the rim. He sets solid screens and is a good team player. He would be a solid pickup for a low major program. Coates has a huge junior campaign and I anticipate his stock should rise.

Johnson’s game has grown on me, as I had the pleasure to watch this young man compete and develop over the last few years. He has improved his strength and athleticism, since his freshman year. He’s a solid scoring option, as he has good finishing ability (even through contact), and also plays great defense with good anticipation for reading passing lanes.