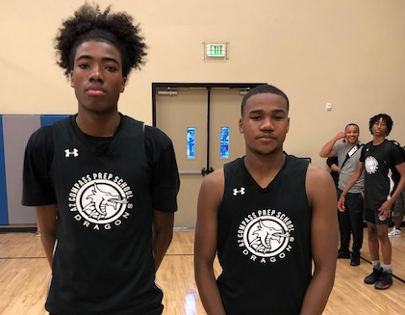 Coach Freeman has built a solid foundation for his program’s summer event. He was able to assemble two handfuls of teams from the AIA and CAA. The event was well attended by scouts, plus offered a free live stream for spectators and college coaches to tune in.

A nice looking small college point guard prospect who is the heart and soul of his team’s offense. He has a solid scoring and facilitation ability. He plays tough on both ends of the floor and has a great motor. His game really grew on me, as he has the ability to impact the game as a floor general.

Yourkoski is a long, athletic wing prospect who has tremendous upside. I loved his ability to utilize his length, athleticism, and anticipation to disrupt passing lanes and deflect passes. He thrives in making defensive plays to create excellent transition offensive opportunities. He will be a gem find for a small college looking for a playmaker to make an impact in their program.

Mellor is a shooter as he displayed solid range. He thrives in transition and knows how to fill the lanes well with proper spacing. He will be a nice NAIA/D3 prospect for a program looking for a shooter.

Gonzales is an impressive looking prospect with tremendous upside. He has a solid bloodline as his older siblings and father had successful collegiate and professional playing careers. Gonzales has impressive scoring ability from all three levels with great court awareness and IQ. He is a solid low-major plus and I anticipate his stock to rise as he has a great platform to build on.

McMichael is an impressive hidden gem find. He is long and athletic with a great frame. He definitely passes the eye test and I anticipate with development and maturity he will be a low major plus prospect over time.

Schinstoch is a sneaky combo guard who has range and prolific scoring ability. He has the ability to run the point position with good ball handling and passing. He would be a solid small college find for a D3 or NAIA as he brings good leadership on the floor.

DeHorny (pictured left) is an athletic specimen who overpowers, out runs, and out jumps his competition. He displayed solid scoring ability from the mid range and finishes above the rim. Defensively he gets after it and with his athleticism and size he covers a lot of ground which is a nightmare for opposing offenses. A solid mid-major talent.

Miller (pictured right) is an athletic hardnose defender who can lock up all 94 feet. His on ball defense causes havoc for opposing guards. Miller is an aggressive guard who can finish through contact which poses a matchup nightmare for weaker or less aggressive opposing guards. A solid low-major plus prospect whose stock will continue to rise.

Tippit is an electric player with great range. He displayed his range by converting from the NBA line. He has a nice handle and shifty moves to keep the defense honest. His stock will continue to rise as he has a lot of time to grow and mature into a solid college prospect.

Mendivil is a slashing type prospect who thrives in going downhill to attack the rim. He has solid finishing ability. Defensively he plays fearless and can lock up all 94 feet. He has tremendous upside and will be a solid college prospect since he has a high ceiling.