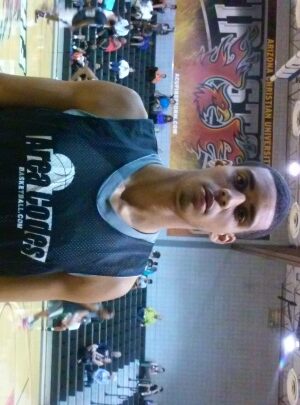 While he sat out the 2016-2017 junior college season to work on his academics, ultra-athletic junior college 6-foot-7 sophomore forward Kwintin Williams is beginning to see his college recruitment soar.  After recently putting himself in a position to qualify academy from the junior college ranks, Williams is now generating major division-I interest for himself.

Recently, Williams received a visit from a member of University of Oregon's staff.  Oregon has been recruiting Williams for several years, and have just been waiting to see if he would qualify academically.  Williams is hopeful that an offer could come soon.

Williams advised me that he still currently has no leader, but he is hopeful that he will find the right fit for himself.  He is simply focusing on his academics right now to make sure that he graduates with his Associate of Arts (AA) degree - needed to allow him to qualify academically.

One of the most athletic junior college talents in the country last season and over the summer (2016), Williams had to overcome a lot of diversity for himself.  After academic issues and a troubled past, the gifted prospect has seriously improved his academic resume, and is now on pace to graduate.