What We Learned From The Hillcrest/AZ Compass Match-Up 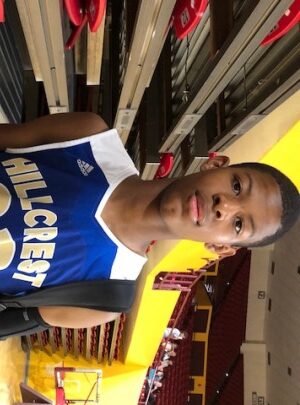 Tuesday evening was a very exciting evening for basketball enthusiasts in the state of Arizona, and especially anyone involved with the Hillcrest Prep or AZ Compass Prep programs.  These two powerhouse prep programs faced off with loads of division-I talent on the floor for spectators to marvel at.  The atmosphere was intense as both programs looked to stake their claim with the big victory.  Both claims for both programs were different in nature though.

For the loaded Hillcrest Prep program, who has been the established top prep program in the state for some time now, and is looking to take their program to completely another level very soon, a win would further prove their dominance in the state.  The Hillcrest Prep program currently has (4) different teams this season - (2) post-graduate teams and (2) high school teams, North and South.  Tuesday evening's contest featured Hillcrest's National Team, their top team of the program, although both high school teams are absolutely loaded with division-I talent.  Hillcrest Prep program organizers Nick Weaver and Matt Allen considered this big-time local matchup simply as business as usual, as the Hillcrest Prep program has produced the #1 pick in the NBA draft, DeAndre Ayton, has traveled all over the world to compete against the World's best, including a recent 2-week trip to China, and also has won a national championship on the Grind Session.

For a much younger, but very talented AZ Compass Prep basketball program, Tuesday evening's match-up was another chance for their program to reach new and exciting heights.  AZ Compass has gone through a lot recently, with a major coaching change for the program, and adding some new pieces to their team at mid-season, including a healthy Chol Marial, who provided a huge shot in the arm for this team.  A win against the class of the prep school ranks in the Western United States, Hillcrest Prep, would be huge for AZ Compass and would allow the program to push forward behind new Head Coach Ed Gipson and his staff.

The game would get out of hand almost in the first half of the contest, as Hillcrest Prep would jump out to a 20+ point lead, before AZ Compass would wake up and begin to climb back in the contest.  After a 48-30 halftime lead by Hillcrest, Compass would fight back hard in the second half, and make a very good game out of it late.  Hillcrest would eventually cruise to a nice 84-76 victory in the contest.

Even though the game was played in a large venue at Inspire Courts in front of a large crowd, making for a spread-out atmosphere for fans and college coaches, scouts and media, the event was still electric, as many Arizona basketball enthusiasts have rarely seen this much individual basketball talent on the floor at the same time, and on one court.  These two teams will face each other once again next week actually (2/12), but this time at AZ Compass, which will be a much smaller venue and will a much more intense atmosphere, as everyone will be right up on the action, and it should be standing-room only.  It could be difficult to get everyone into the gym.

From this first match-up though, there were numerous things that came to mind that we may have learned from this exciting match-up.  Since Hillcrest and Bella Vista Prep have yet to face one another yet, ever, this match-up between Hillcrest and Compass has become the focus annually.

First of all, we learned that while there is becoming a local rivalry that is developing between Hillcrest and AZ Compass, Hillcrest has been the class of the prep school ranks in Arizona for a number of years now, and they are not looking to relinquish that reputation any time soon.  The Hillcrest coaching staff and school organizers have a tremendous sense of pride regarding this fact, and the AZ Compass program is growing some tradition now for themselves, and really would like to take the next step that Hillcrest already has taken in their national exposure.  While new prep schools have developed in the state over the past several years, Hillcrest Prep continues to build on the tradition that they have already built - creating a blueprint for other prep schools to follow.  Of course, the program has had to overcome many obstacles in it's path to get to where they are today, but the continued development and progression of the program has helped the state's overall reputation nationally for basketball talent.  As a result, AZ Compass is now a major factor as well, and has made excellent strides in becoming one of the more prominent prep programs in the West.

We also learned that the dynamic junior backcourt duo of Hillcrest's Kyree Walker and Dalen Terry is as good a backcourt tandem as there is in the country.  I have been talking about this fact all season, about just how good these two young men are, but it becomes much more apparent after you view these two gifted prospects against strong competition.  The better the opposition, the better these two top performers produce.  Terry sees the floor as well as any guard in the country, and he sets up his teammates for nice plays and exciting finishes - something that suits Walker just perfectly, as he is among the strongest finishers in the country from the guard position.  While both prospects have received their fair share of college recruitment, and are both highly sought after recruiting targets, the duo has not been talked about enough.  This could be the best overall backcourt in America, regardless of class.

The AZ Compass backcourt of juniors Jalin Anderson and Xavier Ducell, combined with sharp-shooting senior guard Ismael Cruz is a formidable backcourt all of it's own as well.  This talented trio of guards is explosive and, while they took some time to get going against Hillcrest in this week's contest, once they did, they were a load to defend.  Anderson has not received anywhere near the college recruitment that he deserves yet as a college prospect, and he proved that he is capable of matching up with any guard prospect in his class, as he carries explosiveness off the dribble and an ability to make plays on both ends of the floor.  Ducell is fundamentally sound and is an excellent sleeper prospect that shoots the ball very well with excellent range.  He has progressed a great deal this prep season, and is set to only get better over time with maturity.  Cruz is, flat out, the best shooter I have seen in the West and is as good a shooter as there is in America.  He has never seen a shot that he can't make, and, once he gets going, watch out.  Cruz was an amazing addition to the Compass program this season, and he can fill a void for any college program in America in need of a shooter.

The Hillcrest Prep duo of 6-foot-9 senior forward Dischon Thomas and 6-foot-5 senior guard/forward Devan Cambridge are an excellent duo that had an excellent showing in this week's contest.  Both prospects are tremendous talents and are much better than their college recruitment.  Thomas is receiving loads of division-I interest these days after his de-commitment from the University of Nevada, and he is well deserving of even higher recruitment.  Thomas is an excellent rebounder and finisher, and is also a very good shot-blocker.  He always seems to take high-percentage shots in his team's offense, and makes a high percentage - a valuable asset to any team.  Cambridge is among the best athletes in the business nationally, and his ability to play high above the rim is exemplary. Like Thomas, he doesn't need the basketball to score and has really developed his perimeter shooting stroke this season.  Cambridge is also a human-highlight reel in the open floor, and is simply a big-time overall talent.  Cambridge is also worthy of significantly higher college recruitment, as we have indicated since before the start to the season.

Finally, 6-foot-9 freshman forward Sadraque Nganga is a tremendous talent and he proved it in this week's contest, for everyone to see.  Sadraque may be the best ever to lace them up in his native country of Angola, and he is quickly becoming a household name nationally among scouts and media alike.  Nganga is a rare find among prospects so young, as he possesses amazing size, length, skill and a feel for the game rarely seen for a prospect his age.  While I have not seen many of the elite national prospects in America's 2022 Class as of yet, I can't imagine one better or with more potential and upside than this young man.

These two programs will face each other again next week on Tuesday (2/12), but this time on the campus of AZ Compass Prep, which will make for a very interesting environment, since the gymnasium is much smaller and will surely be a packed house.  Regardless of wins and losses, these two programs are making basketball very enjoyable for basketball enthusiasts in the state to observe, and, ultimately, are raising the level of basketball being played in the state.