Westwind’s Tuff Barnes Among Top Prospects Still On Board 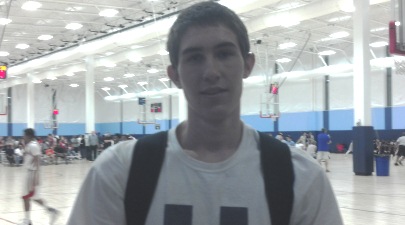 With many of the state's top prospects already off the recruiting board, there are still many top-rated prospects in the state's 2012 class still available for college coaches to take a hard look at this spring.

One of the top prospects still available this spring is Westwind Prep International's 6-foot-6, 210-pound prep forward Tuff Barnes.  The younger brother of current Arizona State sharp-shooting guard Bo Barnes (University of Hawaii transfer), Tuff is among the state's top 3/4 prospects still on the recruiting board.

A graduate of Scottsdale Christian HS in 2011, where he helped lead his high school program to a 22-5 overall record on the season and to a state championship runner-up finish in the 2A Division.  Barnes put up very good numbers as a senior - averaging 14.7 points and 9.3 rebounds per/game.

As a member of Westwind Prep's post-graduate program this season, Barnes played a valuable role while competing against many of the nation's top post-graduate teams and local junior colleges - gaining valuable experience that will have him ready to make an impact at the college level next season.

Barnes is competing this spring on the AAU/club circuit with a group of unsigned seniors coached by new Westwood High School head coach Hoseah Graham.  Barnes is competing with the Arizona Magic Seniors, and will travel this weekend to California to take part in the Double Pump Best Buy Challenge, and then venture to Las Vegas, Nevada the following weekend for another viewing period event.

Barnes has been hearing from numerous NAIA and division-II programs this spring, as such schools as Point Loma, Masters College, San Diego Christian, Nebraska-Kearney, Clark University (IA) and numerous junior college programs have been in contact with Barnes.

Barnes advised me that he looks forward to making a decision this spring on a college program, but is still unclear as to which route he will take.

A very underrrated prospect, Barnes is a versatile 3/4 prospect that has a high basketball IQ and is able to make plays either with his back to the basket or while facing the basket from the perimeter.  Barnes likes to play around the basket and is a nice asset to any team in which he plays for, as he gets a lot done and competes hard on both ends of the floor.

Barnes will be a very nice find for a smaller program this spring looking to gain a four-year college player that already possesses valuable experience with great work ethic.

Barnes has trained for several years with top-rated Scottsdale-based trainer Padraig O'Brien.  O'Brien is very high on Barnes' ability to play at the college level.

"Tuff is a kid that can come in and contribute right away," said O'Brien.  "He is very underrated and would be a nice addition to a smalle division-I program or a smaller school.  He knows how to play and is a great kid."

Arizona Preps will continue to follow Barnes' recruitment closely this spring and bring you any recruiting updates as they continue to develop.

Arizona Hoop Review Scouting Report:  Barnes is a valauble asset to any team that he plays for, as he is a very good teammate and is a very versatile 3/4 that plays much bigger than his size suggests.  Has broad shoulders and a nice wingspan that allows for him to play the post and defend players much bigger than him.  A good scorer on the low block and is capable of stepping away from the basket and knocking down the perimeter shot out to three-point distance, although he is at his best from mid-range and around the painted area.  A very good offensive rebounder that keeps the basketball up high and is a good finisher that does not mind physical contact.  As he continues to gain size on his frame, he will really see his offensive game flourish.  A good low-post defender.  Needs to continue to get quicker to defend smaller, quicker players on the perimeter, but he has excellent work ethic and will work hard to improve as a player.  A good passer out of the post and likes to find the open man on the floor.  Runs the floor very well and outlets the basketball up the floor to the guard.  Has a great attitude.  A nice looking prospect for a smaller college program.  A very underrated prospect.