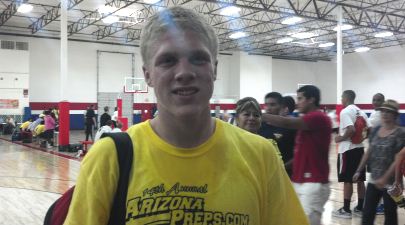 The state of Arizona's 2014 class of prospects is absolutely loaded with talented prospects.  The state will not have another class this special for many years.  One player in the class that has really developed over the past year, and has put himself into a position to become one of the better prospects in the class is Westwind Prep's 6-foot-3, 185-pound junior combo-guard prospect Tate De Laveaga.

Amongst a lot of scrutiny from local high school coaches and Arizona basketball enthusiasts, De Laveaga has not allowed anything to hinder his development as a player.  Instead, Tate has worked hard on his game and has spent many hours in the weight room developing his body.  This young man has added 15 pounds of muscle to his once thin frame, and just since the summer.

Tate's rapid development as a player was very evident in this year's recent Arizona Preps Fall Showcase, as he looked very comfortable on the floor and outplayed each guard that he was matched up with in the event.  The increased competition that Tate has faced this year on Westwind's National High School program has also been instrumental in his development as a guard prospect.

"Tate is currently leading our team in points, assists and steals," said his father and head coach Jeff De Laveaga.  "Those are each three very important areas of the game, which is really helping our team be successful this season.

De Laveaga is also coming off an excellent showing for himself this past spring and summer, where he raised his level of play a great deal.  De Laveaga’s performance during the off-season helped his club team, the Arizona Magic Pump N’ Run-2014, to receive consideration among the nation’s elite 16U teams in the country.  Tate's best club performance came in a game against one of the nation's premier club programs - the Oakland Soldiers.  In the game, Tate scored 18 first-half points in his club team’s victory over the Soldiers – one of the biggest club victories in Arizona history.

Tate advised me that he is in no rush to make a decision, and that he plans to go through the recruiting process.

De Laveaga will continue to attract many more college programs over the next year, as he will look to continue to develop while facing very tough competition while playing for Westwind Prep.

Arizona Hoop Review Scouting Report:  De Laveaga is a tough, combo-guard prospect that is a winner and has always played at a high level amidst his age group and even older.  Tate is capable of playing both guard positions on the floor, but is at this best from the shooting guard position where he is able to score the basketball at a high rate.  Tate is also a deadly shooter with nice range on his shot, and is able to create his own shot off the dribble against defensive pressure.  He has a quick release on his shot.  A tenacious penetrator, Tate drives the basketball hard to the basket and is an excellent finisher for his size.  Has a nice mid-range game, which sets up his drives to the basket and scoring opportunities for his teammates.  An aggressive defender that forces turnovers.  A good passer that sees the floor.  More focus on making players around him better will allow for him to continue to develop as a point guard.  A very good ball handler that can get to anywhere he wants on the floor.  A very good looking combo-guard prospect for the mid-major division-I level currently, but could develop into a higher prospect.